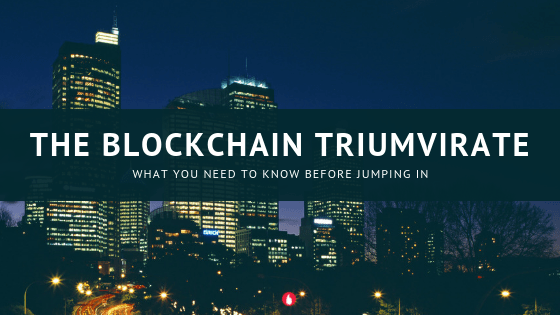 The 2009 financial crisis shook the world in more ways than one. Even with a $787 billion stimulus package from the taxpayer’s money, that the US government put in, it has taken a while. It did something else as well. We got to see the extent to which greed had engulfed us. This also propelled a new triumvirate to emerge. The blockchain triumvirate!

The financial crisis shone a light onto the complicity of policymakers, bankers and large corporates. A complicity that went well past ‘hand-in-glove’! It was extreme. To say the least. Extremities cause frustration and frustration can cause action as well. Satoshi Nakamoto the creators of Blockchain brought Bitcoin to the world as a response to the financial crisis. As an alternative for the people of the world.  It may well seem like it aims to deliver the world from dependence on greed propelled corporate malevolence. It does have a Robin Hood feel to it or perhaps a “we-the-people” feel to it. Thus was born new relevance to “peer to peer” network strength. Considering the timing, this hypothesis rings well.

Enter the Blockchain triumvirate. The three deep anchors bode well for it to be called triumvirate, won’t you agree?  “Transparency – Security – Immutability” upon which Blockchain was built. The lack of these is precisely what contributed to the 2009 financial crisis.

Transparency ensures that every transaction and updation of records is visible real time to all users across the globe. It divests the privileged few of the undue advantage of access to data. Security ensures that data is stored across the world and there is no ‘one’ honeypot to hack into.

Immutability is perhaps the most important one of all. The fact that it is very hard, well next to impossible, to make any changes to the data, makes authority figures redundant. Banks and middlemen who corner a large part of the value generated simply for vouching for each of us, have to find new relevance in the blockchain world.

What stands in the way of people completely getting Blockchain is that it demands a new way of thinking. The edges remain jarred when the assimilation of the new happens through the openings of the familiar. To go beyond the familiar, suspend judgement and evaluate what is, from a position of ‘what can be’, is necessary.

The attempts on this blog through this series, in conversation and with contribution from others, is precisely that. To help stoke conversations by sharing learning and understanding. Which also fuels curiosity and gives the energy to do more of this.

Energy, especially to sustain conversations with curious people who think blockchains are bitcoins and nothing else. Well!