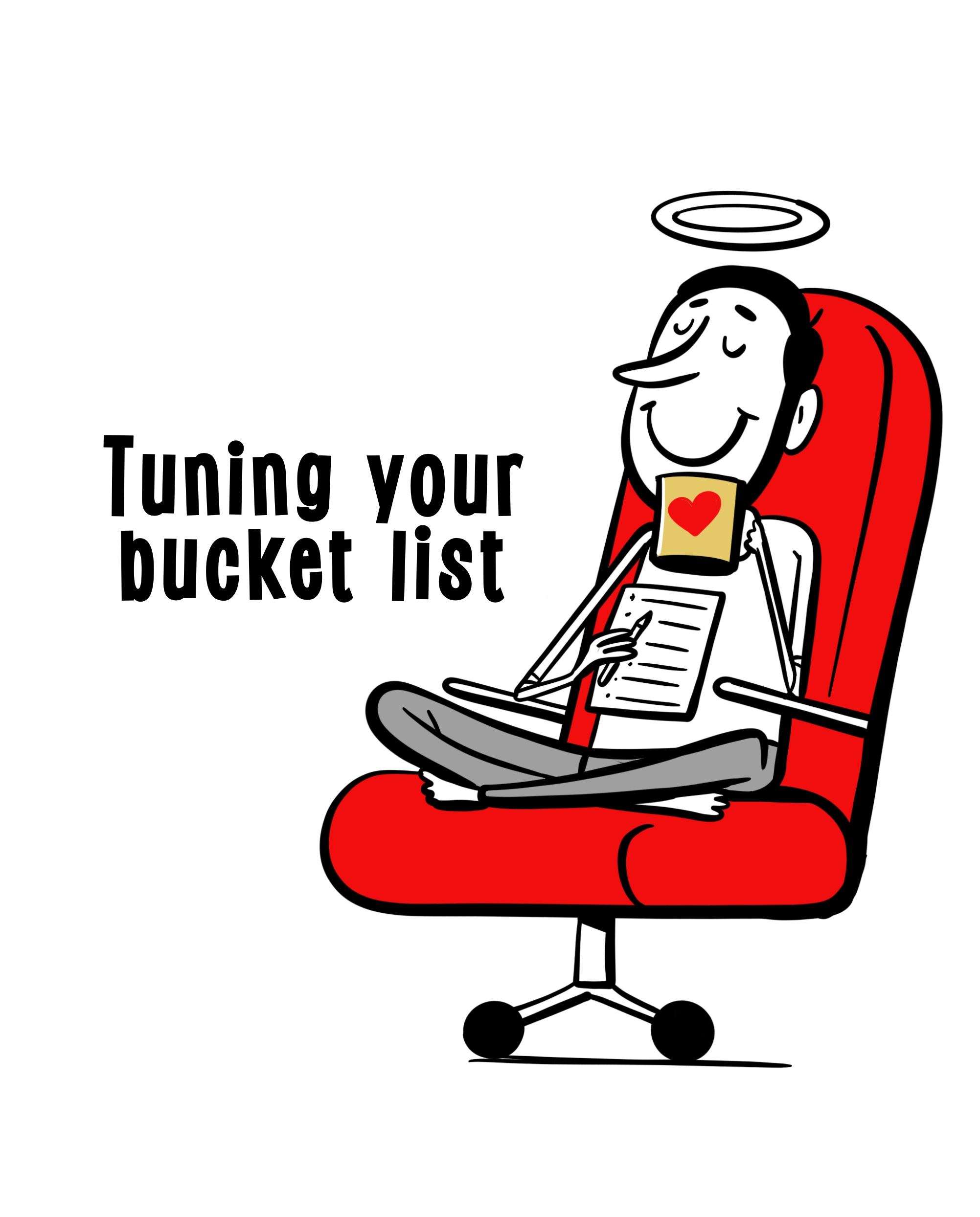 John Goddard, an American adventurer is often touted to be the ultimate goal achiever. When he died at the age of 88, he had checked off most items on his list that he made when he was 15! He had 127 items on that list and when he did kick the bucket, he had done all but seven! That brings me to write about tuning your bucket list!

But before we go there, did you know that John Goddard’s list was not called a ‘bucket list’ when he wrote it down? The phrase ‘bucket list’ came into being in the 2007 film The Bucket List starring Jack Nicholson and Morgan Freeman. It’s a story of two terminally ill men who make a list of things they want to do before they die.

Most lists help. Bucket lists provide direction to life. They provide goals to strive for. Purpose and provides energy to get through the tribulations of everyday life are productive outcomes.

Writing down a bucket list helps your know what you really want. It reminds you of what you set out to do. Being specific and staying so, is a motivator enough. I particularly like the pleasurable satisfaction of checking off an item on the list after I am done. Every item checked off gives energy for a new item to get in.

A bucket list has another dimension to it. It also serves as a useful reminder of the inevitability of death! I have been looking at a few Bucket lists lately and I am convinced that we have talk about tuning your bucket list! A bucket list, while its got death as the trigger, infuses life into the daily day.

Like many other things in life, bucket lists have come to be an example of consumerism at its worst. The tallest mountain, the most exotic location, the most expensive suit or champagne etc. They are all there lurking in a list or on a social media feed.

The bucket list is often thought to be in the realm of the extraordinary. A couple of weeks ago, I met a business leader who brought his bucket list. While doing so, he announced that he was very ashamed of his list because there wasn’t anything extraordinary in it. I begged to differ with him.

In 2014, Gus Conney, Daniel Gilbert and Timothy Wilson published a study. Their study demonstrated that there is a social cost when the experience that someone has is ‘unusual’. The ‘weirder’ the accomplishment (jumping off a plane, climbing a mountain etc, the more the social alienation! Extra ordinary experiences, we think, will make us feel better than those who don’t have such experiences. It actually makes us feel worse!

That’s why I say, celebrate the ordinary.

The bucket list need not be a vanity project that gets to facebook and instagram for quick likes and comments. It is more about progress and living a full life! There is much more to it than something a swipe of a credit card can give!

Have you for instance, considered “learning bucket lists”? What all would you want to learn that would stretch you? Such a list, helps you learn and change. And when you do it with others, it offers you a challenge that you go towards. A language. An art form. Maybe algebra?

Well, whatever it is, learning and change renews purpose. And by the way, tuning your bucket list with other people’s lists makes it even more endearing! I mean, comparing notes and working on it together? Do you have a bucket list buddy?

Have you heard about a reverse Bucket list? No? Well, here’s how it goes. Grab a pen and a sheet of paper. Ready? Here we go.

2. List out the people you have in your life who never lost faith in your despite your blunders?

3. Have you had ‘near disaster’ experiences? Like a car crash you survived by a whisker? A financial decision that would had you implode, if you had indeed gone ahead with?

4. Who all have you helped? How? And thats just not about money and other tangible resources! Examine each of these questions (Feel free to add more questions to the list) under various time horizons. (Like, In my 20s. 30s, 40s etc).

I can’t tell you how transformative such journaling has been for me. They could well help you tuning your bucket list! Being grateful for the present moment in all its forms, makes room for a better future. Let me know how this worked for you. We should talk about it for sure.

1. How about algebra for fine tuning your bucket list?! Could learning algebra in my 60s make me smarter?

2. “Why overthinkers struggle with remote work. ” says that overthinkers “might be struggling the most” in the remote-work era, since they “rely a lot on that context”

3. Why the Old Elite Spend So Much Time at Work. America centric but has a few pointers that are interesting.

” writer Paul Millerd calls a “Boomer blockade” at the top of many organizations, keeping Gen-X and Millennial workers from promotions. As older workers remain in advanced positions in politics and business, younger workers who would have ascended the ranks in previous decades are getting stuck in the purgatory of upper-middle management.

4. “I talked to 70 parents of highly successful adults—here are 4 phrases they never used when their kids were young”

5. There is something to conspiracy theories. Here is someone who has watched hundreds of flat-Earth videos writing about what it would take for us to fight disinformation.

That’s that for this edition. Stay well. And hope fine tuning your bucket list will get you started for better things in life!