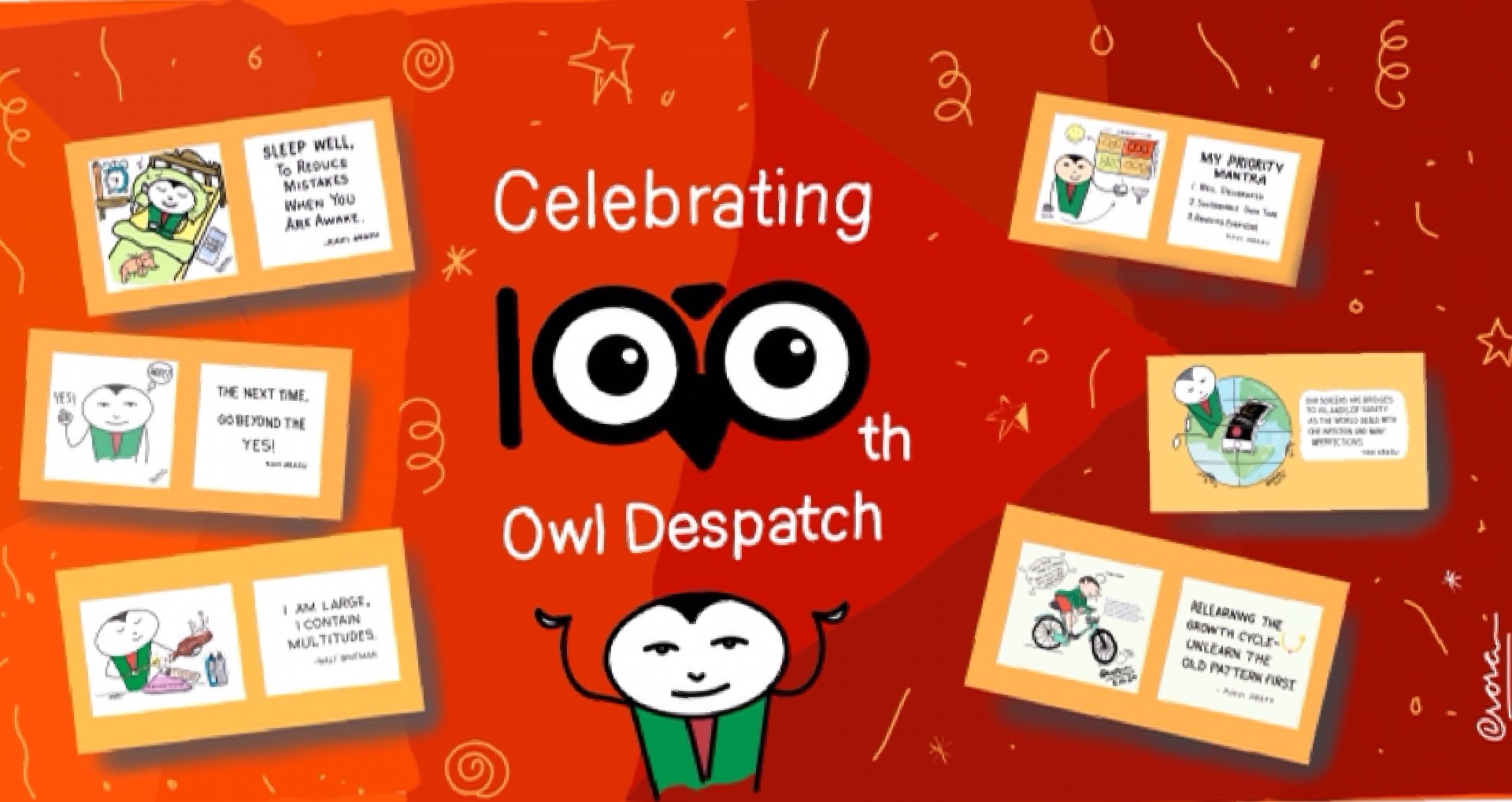 It started with a bunch of friends who exchanged notes amongst themselves about some interesting articles I had shared with each of them, separately. Two of them turned around and asked why I didn’t share it with all of them at one stroke. One amongst them said, “How about a newsletter?” That’s the origin story of The OWL Despatch. This is the 100th edition!

I remember asking them, “who will read my newsletter?”. They looked at each other and said, “to start with you have an audience of two people.” And so we started.

Vivian Richards, when speaking of Sunil Gavaskar, narrated a story that has stayed with me. I read it as a young man and this story left an indelible imprint.

Vivian Richards was fielding just as Gavaskar scored the runs to bring up his 100. Richards walks up to congratulate Gavaskar.  Only to realise that he is breaking news to Gavaskar that he has scored a 100. Gavaskar, Richards discovers, has not been looking at the scoreboard!

I am no Gavaskar but the 100th edition was not on my mind when I started out! It hasn’t been on my mind all through the 99 previous editions. But today, it is.

The 100th edition, for some reason has gotten me into a contemplative frame.  And so I have chosen to pause and ponder on the ride thus far and wonder about what next. You see, every milestone presents an opportunity to change, while reminding you of the distance done!

So, What Has It Meant For Me?

Well, every edition is a labour of love. And whenever it strikes a chord with readers like you, it brings up a smile. To hear that it stirred a discussion or when someone writes a note on how much it has made a difference to them, it is a huge cherry on the cake!

The cake in itself is what writing it does to me! For one, it is something to look forward to. I have a sobering line on my desk which says, “This too shall pass. Is The Edition of The OWL Despatch Ready?” In a sense, it brings equanimity to wins and losses of a regular day. And during the quarantined heights of Covid, sending out The OWL Despatch provided sanity!

These have powered The OWL Despatch every fortnight and we are at the 100th edition!

Two more things. One, every time I sit down the write The OWL Despatch grand notions of understanding and clarity about a subject that I harbour in my mind, get blown to bits. Like Paul Graham says,

“Writing about something, even something you know well, usually shows you that you didn’t know it as well as you thought. Putting ideas into words is a severe test. The first words you choose are usually wrong; you have to rewrite sentences over and over to get them exactly right. And your ideas won’t just be imprecise, but incomplete too.  ….”

The OWL Despatch has forced me to think deeper about a topic. It takes focused reading and writing. Churning out editions when life presents itself with its warts, blemishes and flourishes is something that stays with me.

I must introduce Deepak Arora to you here. He sprinkles the magic and creates an image for every edition. Deepak is a radiological physicist. He started making motivational cards for cancer patients with whom he worked. Especially kids. Imagine putting together an artistic ‘wall of courage’ in the waiting area of the hospitals as patients walk in. He is a man of phenomenal energy. Some of it rubs off on me.

About five years ago, he started taking graphic recording more seriously and started recording TED Talks, meetings and panel discussions. He says, he has many miles to go and I have teased him saying we are just at the 100th edition! And beginning. A world of thanks to Deepak!

What After The 100th Edition? What’s Next?

Change is in the offing.  Future editions should be quite different than the 100th, dont you think?  Format? Medium? Frequency? Content? I started out writing a long time ago and although The OWL Despatch has evolved over time, the 100th edition makes me want to be more deliberate with the future!

What’s next is also a question that I want to ask you. What do you think I should do? What should I add? Delete? Do more? Do less? I would be more than merely grateful to you for the kindness of a reply. I seek your help in subscribing and spreading the word, if you find this useful.

This is the 100th Edition of sharing five interesting reads that I curate for you. For the 100th edition, I start with workaholism.

That’s that for now. I look forward to getting better at what I do. And also, catch a coffee with you. Someday.

100celebrationIdeasscoreboardThe OWL Despatchwhats next
RELATED POSTS
Ideas For Getting Better At Your Craft KaviJune 16, 2022June 16, 2022