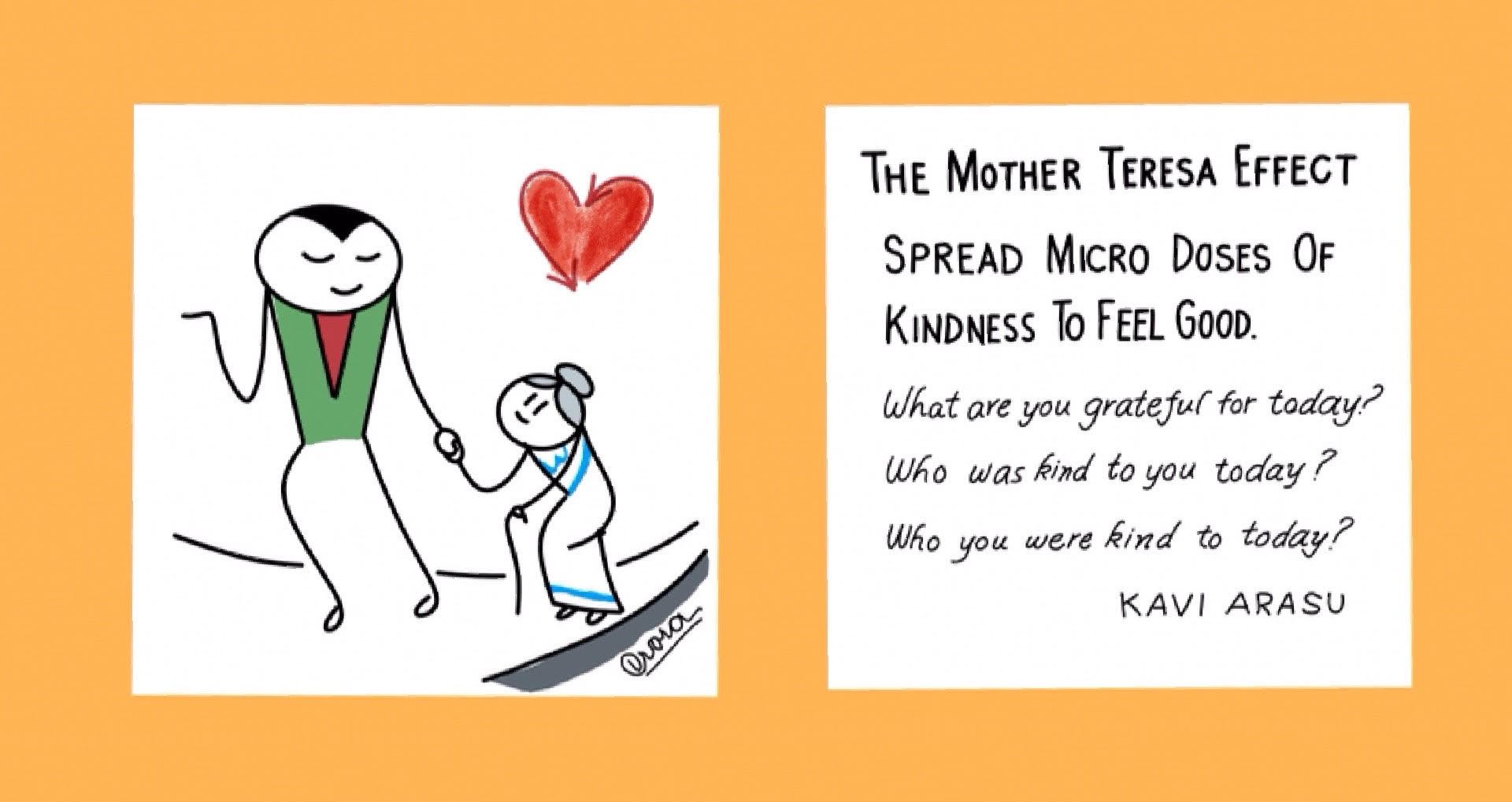 I will let you in on a routine that we share in the family. A routine that came up sometime during the pandemic. I think it came up because we wanted healthy routines. It got bolstered after I got acquainted with The Mother Teresa Effect.

The routine is simple. We ask each other three questions.

It gets us reflecting on the day but most importantly, it gets us thinking about kindness. Plus, we have a whale of fun doing it. And a whole heap of discovery. Of how innocuous kindness can be. Especially, when there are micro doses of it and on the same note, how rich it could be.

In the 80s, David McClelland, a researcher at Harvard helped an old lady cross the road. Now, you would argue that it is an ordinary experience. One that you would have been in yourself or have borne witness to it happening. After crossing the street, David McClelland felt good. And started wondering why he felt ‘good’. After all, there wasn’t anyone to acknowledge or recognise his good deed. Neither was there wasn’t any monetary reward. Yet, he felt good and he was intrigued.

As a researcher engaged in the study of a hormone that helps the immune system, he started examining if there were connections.  The next you know he was running a study to see if good deeds could aid the immune system?

He got 132 students Harvard students and organised them into two groups. He then provided each group with a different movie to watch. One group got to watch a movie on Adolf Hitler and another a film on Mother Teresa and her work in India. He did one more thing. Actually two. Before they got to view the film he measured the levels of ‘secretory immunoglobulin A’ from saliva samples. He did the same after they watched the movies as well.

The group that had viewed the film on Mother Teresa had significantly more levels than people who watched the movie on Hitler. Just watching and being exposed to acts of kindness gets us feeling good. And that feeling is multiplied when we choose kindness and practice it well. That high or the feeling of happiness that you possibly have experienced sometime in life, after doing a good deel is called, ‘Helpers High’! McClelland christened it the Mother Teresa Effect.

Now, Mother Teresa has had a huge effect on the world. But just watching her is the Mother Teresa effect at play. In effect, we can all be versions of her (or anyone else for that matter) while practicing kindness as a way of life.

So, what can you do?

There is often a feeling that kindness requires writing of huge cheques or spending large swathes of time etc.

I disagree. While those kinds of kindness are well within our reach, and we must pursue those, I am more interested in micro doses of kindness. Like a smile. A friendly word. Perhaps a keen ear. Like a random act of sharing. The other day, the security guard walked up and thanked me for wishing him everyday. I didn’t realise that this simple act of wishing was having such an important on him. It left me with a profound lesson on what constitutes kindness. It is the eye of the receiver.

By the way, it can have an impact of improving your health as well as the Mother Teresa effect shows.

So, in the next few weeks, consider a few random acts of kindness..

a. Consider Volunteering
b. Donate money
c. Spread micro doses of kindness around..

And above all else, every day, try asking yourself these three questions.

It is good for your health. The Mother Teresa Effect helps understand that. And by the way, it is critical for humanity.

The OWL Despatch is at edition 98. Sharing ideas through The OWL Despatch, is a devious way of living The Mother Teresa effect, perhaps. It started out because I liked to share. Nowadays, it is just so much a part of me. I hope you have enjoyed reading it as much as I have putting it together.

Here are this edition’s top five reads that I found interesting.

1. The forgotten medieval habit of ‘two sleeps’
“Ekirch began to suspect that the method had been the dominant way of sleeping for millennia – an ancient default that we inherited from our prehistoric ancestors. The first record Ekirch found was from the 8th Century BC, in the 12,109-line Greek epic The Odyssey, while the last hints of its existence dated to the early 20th Century, before it somehow slipped into oblivion.”

2. Please Stop Using These Phrases in Meetings.
From “You are on mute” to “We’re going to wait five minutes for everyone to join”. Some stuff that we all use regularly.

3. Manfred Kets de Vries is a personal favourite for a long time. When he writes, I read. And sometimes he provokes you to with a statement. Like this one. “Three per cent of people in the financial sector are psychopaths.”

4. Ikea hacking. Well, what in God’s name is that? Well.
“Broadly, Ikea hacking is any form of upgrading, customizing, repurposing, or personalizing a piece of stock Ikea furniture.”
The times that we live in.

That’s that for now. I really hope you are staying well and taking good care. I am optimistic that we are meandering towards some sort of normalcy. In the new normal that lies ahead of us, I hope we will be able to meet and catch a coffee. It’s been some time.