Three Questions To Help You With Your Priorities

Three Questions To Help You With Your PrioritiesKaviJanuary 11, 2022January 12, 2022 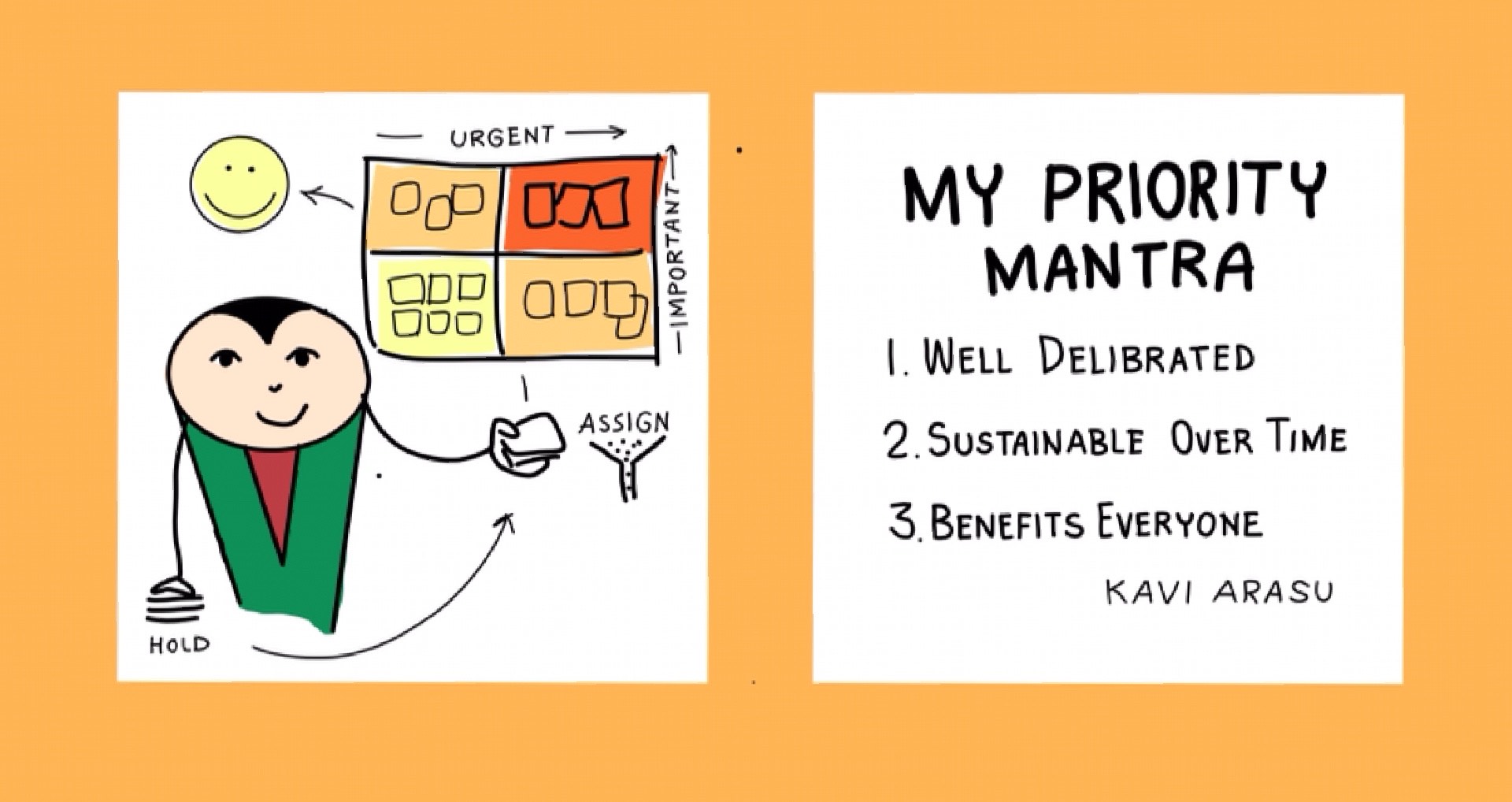 A couple of years ago, I was having lunch with leadership team as they spoke of their priorities. Even as the soup was settling in the stomach, I knew why I was struggling with my priorities! Before we move any further, here is a quick invitation. What are your priorities? How many do you have? Grab a piece of paper and list them down.

“The word priority came into the English language in the 1400s. It was singular. It meant the very first or prior thing. It stayed singular for the next five hundred years.

Only in the 1900s did we pluralize the term and start talking about priorities. Illogically, we reasoned that by changing the word we could bend reality. Somehow we would now be able to have multiple “first” things.

People and companies routinely try to do just that. One leader told me of this experience in a company that talked of “Pri-1, Pri-2, Pri-3, Pri-4, and Pri-5.” This gave the impression of many things being the priority but actually meant nothing was.”

I remember the leadership team outlining about 15 priorities that they were working with. Ambition, stretch, growth, challenge and such stuff powered those.

There is a lovely number from my daughter’s playlist. I just love it. It it goes like this.

As sly as a fox, as strong as an ox
As fast as a hare, as brave as a bear
As free as a bird, as neat as a word
As quiet as a mouse, as big as a house
.
.
.
As pretty as a picture hanging from a fixture
Strong like a family, strong as I wanna be
Bright as day, as light as play
As hard as nails, as grand as a whale

The song is called “Everything at once” by Lenka. I love to hum along. And the other day, as I was humming along, I realised that “Everything At Once” perhaps explained what sits at the heart of having multiple priorities.

Our society now over indexes speed and time. We want to succeed early. Childhood prodigies. Billionaires at 25! The winners under 40. Or was that 30? Everything is accentuated on the “Now”.

Technology makes it possible in many cases and alluring in others. It has brought time saving into our lives that could give us leisure and perhaps a moment to catch our breath. We have chosen to reinvest that into other priorities!

Even as society goes wild over precocious victories, our affordances to take stock of what costs our priorities come at, are barely utilised. We must reflect on how much extra we end up paying, when we demand everything at once? Irrespective of who pays for it and how it is paid for!

There obvious costs to pursuing multiple priorities all at once. The most common ones include health, relationships and happiness. The wildly successful 32 year old founder who pops pills to survive, has no time for friends and family and is perennially stressed is anything but successful. I digress. Let me come back to priorities and their costs. Yes, health, relationships and happiness is typically a cost when multiple priorities pluck away spaces in your calendar.

But there is an additional cost. And that is this.

When we have a long list of priorities, we pay for ever ensuing priority with the priorities that precede it. Think about it, every additional priority takes away focus and time from the priorities ahead of it. That to me is a huge cost that we often don’t factor in and just keep missing out.

Especially so, because most often the more important of the priorities get listed out first. And when we keep adding to the priority list, the chances the important one gets done stands diminished.

My Mistake(s) With Priorities

I have been making several mistakes with priorities. Chief amongst them is having too many of them. The next in that list is not factoring the real cost of having more priorities. Of course, I have wanted everything at once.

Over time, I have a three question rule whilst coming up with my priorities.

I am taking the liberty to share them with you. These work for me. Please do come up with what works for you.

Here are three questions that I ask myself when I establish a priority.

1. “How deliberate have I been about choosing this priority?” I am well aware that everything in the wish list cannot be a priority.  The criticality of consequences and the time a priority has been on my mind are key measures.

2. The second question: “What does it take away from me?” A priority is something that I am willing to pursue while it does not take away from my future as it feeds the present! It has to be sustainable.  If my health and relationships are going to be in jeopardy because of a key priority, well, it ought not to be one!

3. “Who else gets benefitted because of me having this as a priority? How” For I have found, that priorities work better for me, when I have many others on the journey along with me who stand to gain.

At the heart of it all, there is a foundational belief.  I choose success that lasts over fleeting wins. That’s just me.

What do you think? How do you work your priorities?

The OWL Despatch is at edition 97. Sharing ideas through The OWL Despatch has been amongst my priorities. I hope you have enjoyed reading it as much as I have putting it together.

1. The bearable lightness of less where Karthik Venkatesh makes a persuasive case for decluttering and much else. Awesome read.

Minimalist financial thinking advocates a simple lifestyle and keeping track of where your money is going. If this sounds like good old-fashioned grandparental advice, that is because it is. Remember, back in the day, minimalism was the de facto order of the day since the Pandora’s box of material choices hadn’t yet been kicked open.

Cleaning up your image, however, is not cheap. A serious campaign can cost between $10,000 and $20,000 or more and will usually run for at least four to eight months. Earle’s twenty-four staff members deploy a suite of tactics to dilute or outright remove unwanted content. We live in different times these days! Read here.

3.  Why young couples are seeking therapy.

A decade ago the young couple might have been considered an anomaly, but Wu and Tang represent the millions of millennials for whom professional help has become fundamental to mental health maintenance.

4. Sixty Years Ago, NASA Scientists Found That Women Would Be Better Astronauts. Their Work Was Never Published. It is an important read about how our biases have come in the way of change.

“How did you find me? I haven’t even called my family for 10 years.”

Google’s street view has washed many a dirty laundry in public!

And by the way, Have you played Wordle?

That’s that for now. Thank you for keeping The OWL Despatch amongst your many priorities. !