It’s Too Soon To Say 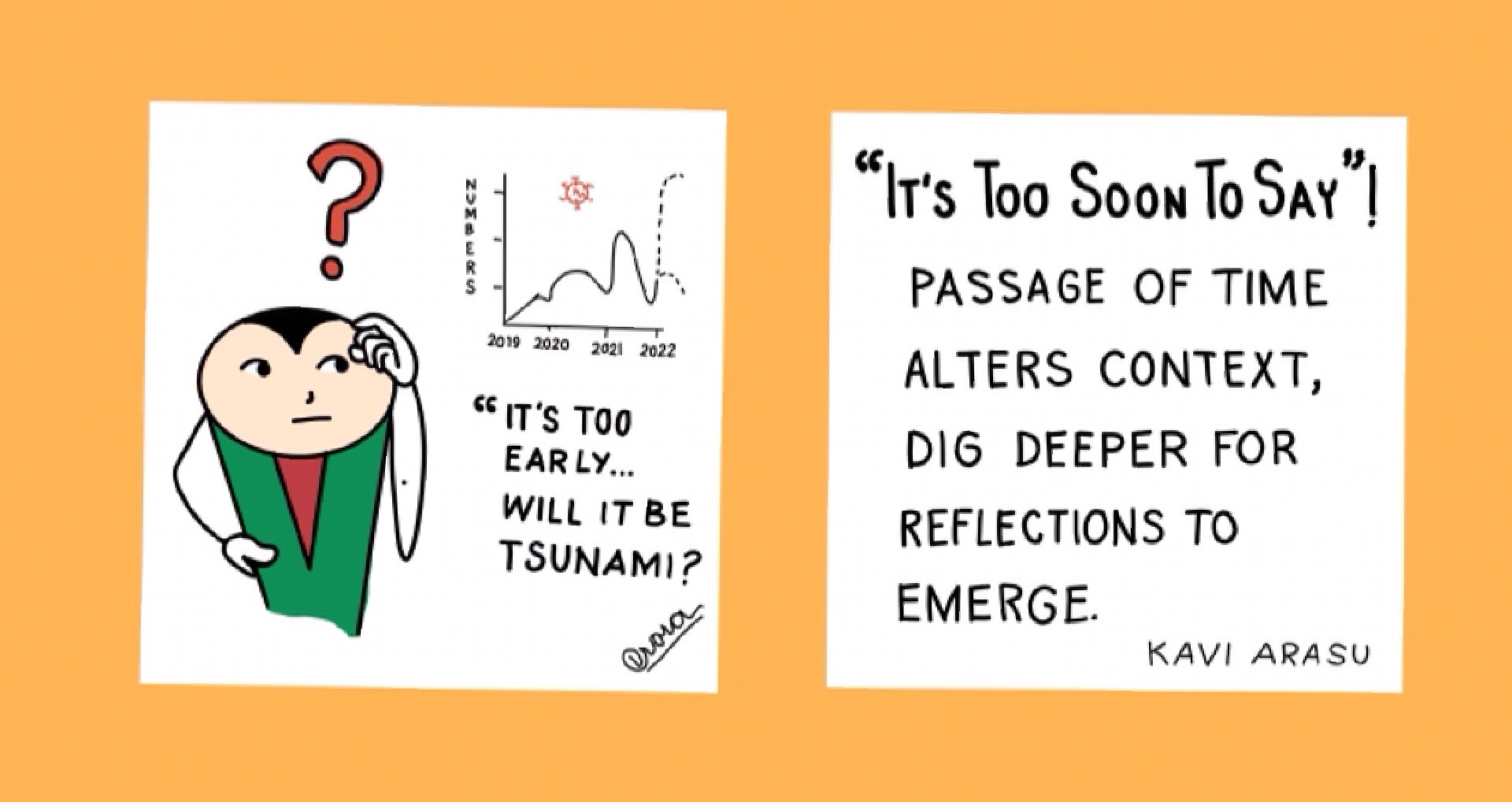 In the year 1973, Zhao Enlai, the Chinese premier was interacting with students when he was asked about the effects of the revolution.  His reply left many swooning in admiration about Chinese thinking on time and change, given that it was 200 plus years after the French Revolution that he was being asked the question. Zhao Enlai’s response: “It’s too soon to say”.

Think about it. It is such a prescient statement! We live in a world that is over indexed on speed and gives in to the attractiveness of the immediate moment without much of thought over long term good. Occasional moments where there is some semblance of reflection and thought exists. However few and far between. One such, which is regular, is at the end of every year.

So, it’s that time of the year where I sit down to think about thoughts and ideas that I kept to think and expand on at a later time. “It’s too soon to say”, is a thought that sits on top of the list.

The Times We Live In

Now, there is no question about how much the immediate is preferred over the long term in our current times.

This quarter’s results are more important that what happens to the long term health of the company.

Ambitious parents shoving their children’s future into darkness by exposing them to the arc lights early on.

Climate change. Politics. Education. Etc. The examples make a long enough list to cite this as the norm. Time’s endless march towards relentless change stays well above our ability to make complete and coherent sense of it.

Reflecting on our experiences help us see what we miss in the steady bustle of daily life. What we conclude as benefits and pluses, sometimes turns out to be quite ruinous in the long run! And vice versa.

It’s Too Soon To Say

Personally, a silver lining of the pandemic has been discovering some of my diaries, scrapbooks and letters from another era. I have read them a few times now. With a fair share of relish and embarrassment.

I am struck by how certain I have been about me lessons learnt from various incidents. The certainty finds its match in how ridiculously shortsighted and wrong my conclusions were, back then. And how the future unfolded in a very different way!

So much so, that as I collect my thoughts and write my reflections for the year, I have been wary of definitively conclude one way or the other. The mantra that’s been on my mind is “It’s too soon to say”!

The passage of time alters context and much of what seems obvious and plain sight, shifts. I have found myself asking the question, ‘what was I even thinking?’! I draw solace from the fact that had taken the effort to write things down.

Reflecting on my reflections has helped me think and draw meaning. I dig deeper for better questions and wait for the answers to emerge. It’s that season, you know!

The team at Flyntrok came up with a fun tool to sit down and do this. In simple ways, without definitive conclusions, where the focus is on recording without impeding reflections.

I would be delighted to share a digital version with you, if you are interested. Please drop in a line to programs@flyntrok.com. Just a crisp mail will do. A little more of words to wish me luck and new year cheer will bring on a smile!

If you are a pen and paper person, there is a printed version of this tool. Please send in your address and phone number to the same mail ID, and I will have it reach you. As always, I treat personal data with great care. And please pay by passing around some kindness and love!

Many years after Zhao Enlai’s comment of “It’s too soon to say”, it turned out that he was speaking of another uprising that happened in 1968. And not the original French Revolution. But then, such facts should not interfere with the profoundness of the message! 🙂

The OWL Despatch is at edition 96. It’s too soon to say if it has made a resounding difference to many. Even though, I would like to think so.

Typically, I put one edition out every fortnight, anchoring it on one key idea and spice it up with five reads (links) that I found interesting. Here are the five for this week, starting with a puzzle

Keep the mask on as you welcome the New Year! And that’s that for this edition and for this year too. Take good care. Here’s wishing you the very best for an awesome season of reflection and quiet time. There is a New Year coming. Perhaps it won’t be that tough. Or maybe it will. Yes, it’s too soon to say.