I got lucky. So can you. 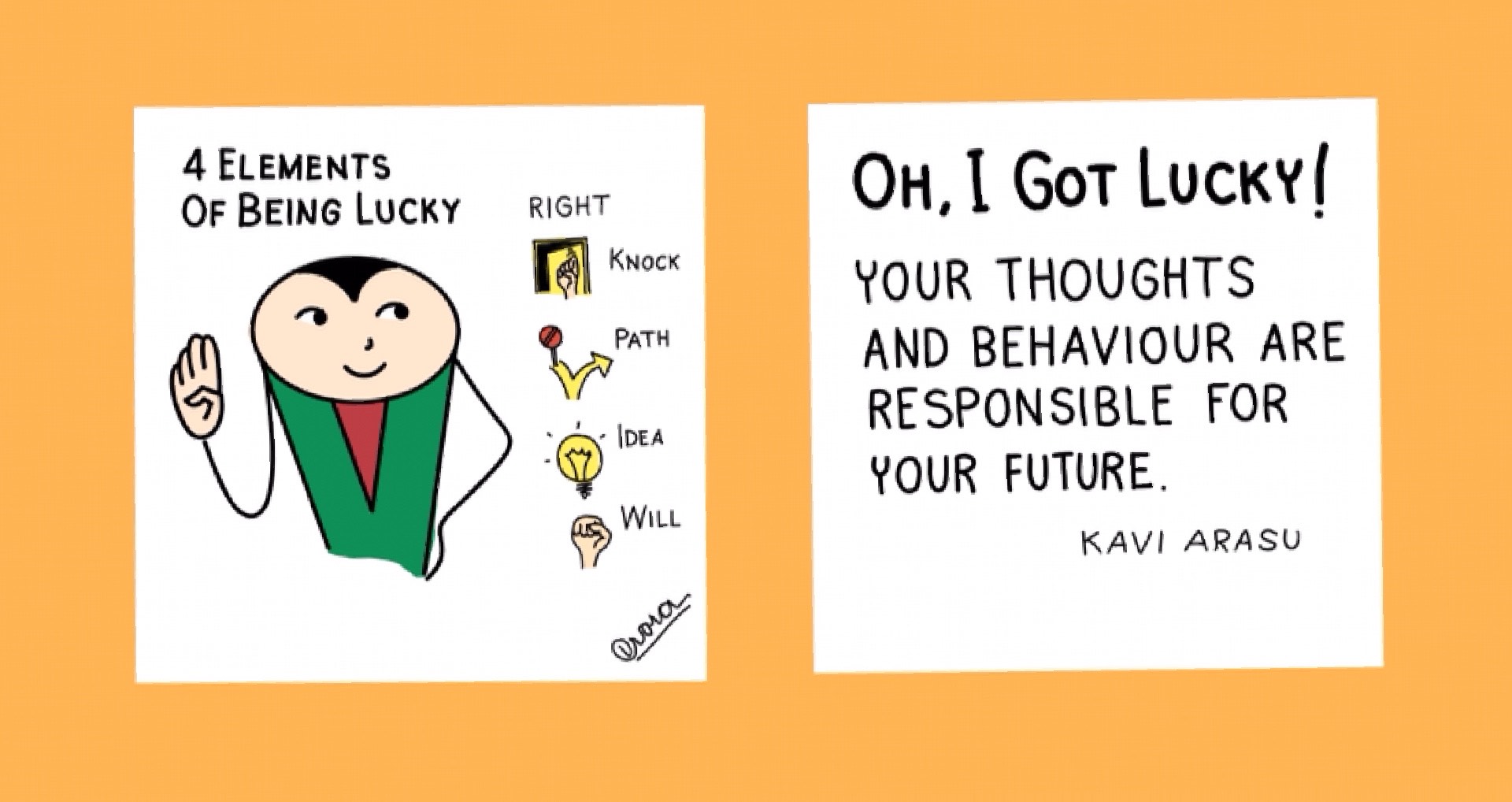 A few weeks ago, I got to have a sit down meeting with a gentleman I respect. He has built a robust business that straddles time zones and borders. It’s been long since we last caught up in person and we were exchanging notes about success and failure. His, that is. And when I prodded him to talk a bit more, he said, “Oh, I got lucky”!

I have been interested in this idea of luck for a while. How do people get lucky? Is it all pre-written as some of us would like to think? Or is there any scope at all to influence luck? This conversation added some energy to that question.

I chanced upon “Chase, Chance, and Creativity: The Lucky Art of Novelty” by James Austin. (First published in the 1930s and again in the 2000s. That very fact that it got to that form after so many years, told me something). He outlines four different ways of chances to emerge. From the ones that happen in any case to the ones that you can pluck out of thin air.

The other piece of work that I got lucky with is the work of Dr.Richard Wiseman. (Check out The Luck Factor). Dr.Wiseman, puts forth four essentials to get lucky. This is the result of research for more than a decade. And it sat well with me.

Cutting to the chase, Dr.Wiseman identified that people who counted themselves as lucky had these four elements in elements

He says, “although lucky and unlucky people have almost no insight into the real causes of their good and bad luck, their thoughts and behaviour are responsible for much of their fortune”.

Over 400 people volunteered for the research that Dr.Wiseman conducted where he asked them to identify themselves as lucky or unlucky.

Personality tests revealed that people who were ‘unlucky’ were generally much more tense and anxious. Lucky people, on the contrary, more relaxed and thus being able to spot and weave things together from many things, rather than only what they are looking for!

Not only that, the lucky people went out of the way to add variety to their life. From changing routes to work, to alter ways to discover new people in conversations!

The other thing with most lucky people is that they count themselves as lucky! And that brings me back to where I started. The gentleman who triggered this whole thought process, by saying “I got lucky”!

I wondered how many times I have heard that statement. Upon reflection, I think I have heard it from several successful people. Perhaps, it is a way for the successful to get luckier. It is far from being a magic charm. But the prospect of getting luckier in a rational sort of a way, is magical for sure. Whatsay?

Frankly, I didn’t think The OWL Despatch will get to edition 95. But here we are. Guess, I got lucky.

Typically, I put one edition out every fortnight, anchoring it on one piece of research and five other interesting reads that perked my
ear.

Here are five pieces for you to chew on.

Now, as an add on, Have you heard of (or have) ‘Mouse Movers’? Well, let me know if you know someone who uses them. I find it a fascinating point in time to live in to see creative energy spring. Or move! I was reading “Workers Are Using ‘Mouse Movers’ So They Can Use the Bathroom in Peace” and shaking my head!

That’s that for this edition. Here’s wishing you peace, calm and joy as we head into holiday season. Stay well and spread the word. Stay away from the virus!