When The Waters Recede 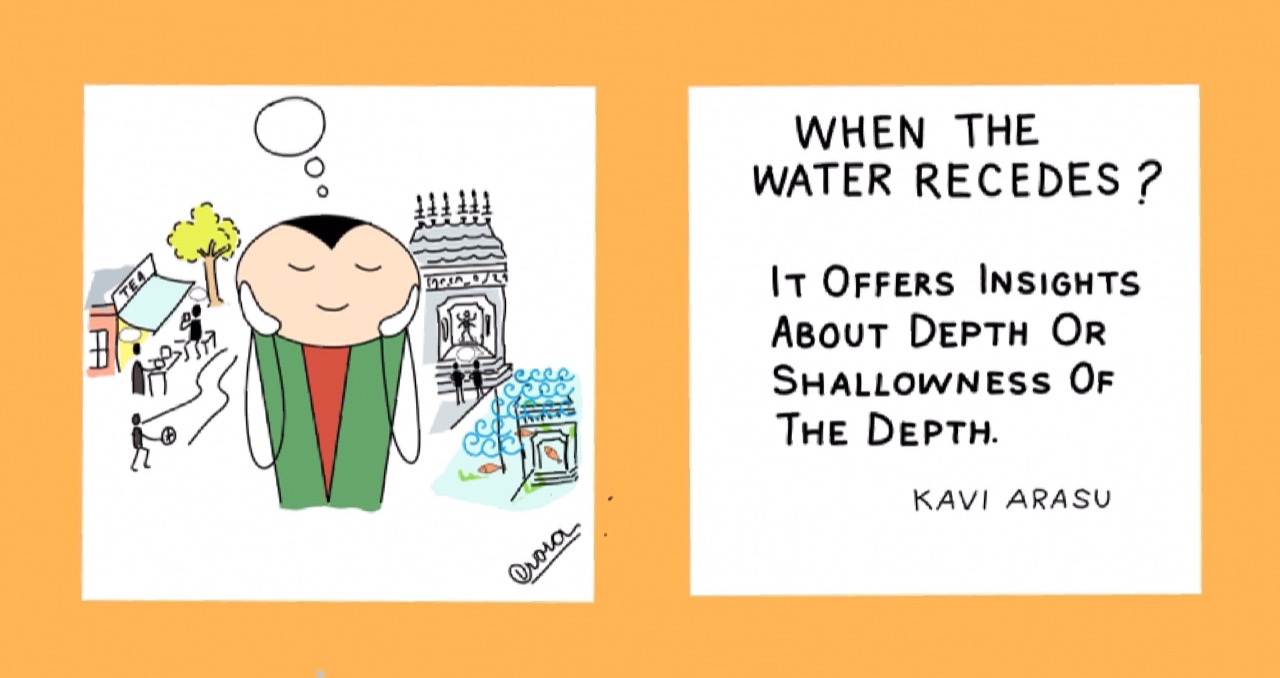 Last week, standing by the rain soaked shore temple of Mahabalipuram, our tour guide Mr.Swami told us an intriguing story. I had ventured out for a family break after ‘forever’! Mr.Swami was an articulate man except when he spoke English. That’s when he became funny as well. And when he told us the story of what discoveries await when the waters recede, he seemed profound as well!

Mr.Swami, (he insisted on being called that way. ‘Mister’, included), tried to help us imagine how spectacular the architecture would have been in its heyday. 8th century AD. Frankly, it wasn’t too tough, given how spectacular it is. He got us to imagine sea going vessels, bustling ports and happiness lavished on a quiet seaside.

Silence kept us company as our imagination roamed the streets of a happy past. Perhaps to break the silence, Mr.Swami added, “much of the happiness is buried under the sea”. He spoke of larger portions of the temple engulfed by the sea and remaining buried.

Mr.Swami, went on “Truth becomes evident when the waters recede.” Apparently when the Tsunami struck in 2004, there was new evidence that emerged to bolster the case that there were lost treasures under water. When the sea retreated several hundred meters, people saw structures on the sea bed. The stuff that the sea had swallowed and kept with it for hundreds of years.

When the waters recede

Mr.Swami is a fascinating man and so is the imagined picture of a fertile happy place swallowed by the sea.

That evening, sitting and reflecting on Mr.Swami’s eloquence about a happy time in the 8th century, my mind made a metaphorical leap.

My equivalent to “when the waters recede” was the quiet time last week. This family time after an incessantly busy period that extended close to two years was when I took the time to smell the flowers. (And cattle dung).

My calendar remained blank even as the emails piled. My break from social media helped heaps as several realisations came through. No, I didn’t sit in silent meditation all day. That’s not a bad idea, though.

I did spend time talking to ordinary village folk and seeing their life in close quarters. Cows, goats, milk, disease, hope, pain and the deceptive simplicity of it all. I drank tea out of generous cups of love and abundance. Where pouring rain and the beating sun are taken in the same stride.

Walking long hours in serpentine village roads without a honk to shake my trance filled steps was all that I needed. Of course, I made a quick dash to places of historical interest, like the shore temple.

I abandoned all but one of my routines. The only routine I followed was to sit everyday for about 30 minutes and gather my thoughts. Random reflections, observations and such else. Almost everyday I ended up writing for far longer than 30 minutes.

“When the water recedes” as a title to this email, emerged from there. For I became clear about why I set out to do to what I am doing, and how much I have drifted from that ‘why’! Unknowingly.

In those precious moments, new questions came up. Old questions found new answers. My conclusions and lessons got a revisit and got a very different texture. The sea of habit and relentless pace of everyday work, had submerged many foundations. When the waters recede, the ‘why’ shows up just as a submerged treasure! The many wrong turns of the “how’ become clear. By default the ‘what’ gets a clean up!

I realise I need to let the busy waters of ‘relentless everyday work’ recede a bit. Quiet times help us clear the blur of action and clarify direction. Small calibrations to direction, changes where we end up.

Focused reflection is a lost art. Having a coach or a mentor helps a lot. But immersing in quiet reflection that quietens the mind, provides spectacular clarity too. From clarity, emerges energy for new action.

The works of Chris Agyris, Donald Schon and others have gone a long way in shaping my work around Reflective Practice. Guess what, much of that showed up like the submerged treasures of Mahabalipuram! When the waters recede, it offers insights about depth. Or the shallowness of the depth.

Well, after the silence, I have been dealing with a tsunami of sorts! But there is change coming up. To my way of working and to The OWL Despatch as well. Until then, I will stick to what has been the case for 93 editions.

This is edition 94. Typically, I put one out every fortnight, anchoring it on one piece of research and five other interesting reads that perked my ear. Here are five pieces for you to chew.

I found it fascinating to read this. “A delivery station employing nearly 100 workers ensures that anywhere between an astonishing 25,000 to 35,000 orders are prepared by 9 a.m. each day to reach their final delivery.” Read more.

2. For the 2022 world cup, Qatar is building a ‘dismountable’ stadium. With 974 shipping containers

4. One month of the surface of the Sun, presented with time lapse photography using 78,846 images. Must see! Just a few minutes will set giant perspective on where we are and the wonders of the universe around us.

5. Finally, in line with “when the water recedes”..what would it look like if the planet warmed up by 4 degrees? A scary map. Take a look.

That’s that for this edition. Busy times envelope me. The quiet time from last time makes me look forward to it. Stay safe.