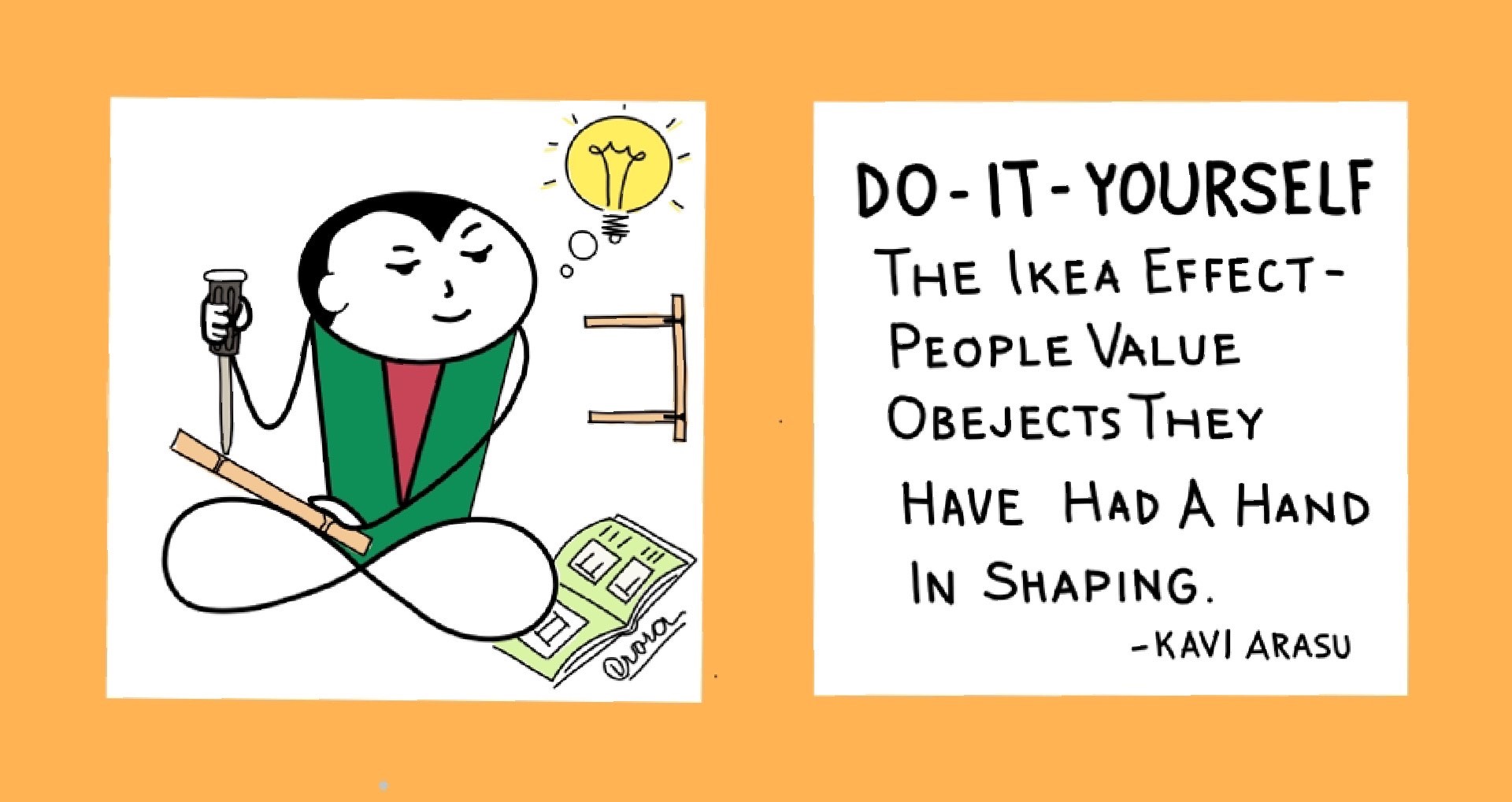 In much of the work that I do, there is one question that is common. ‘How do we make people value change that has been well thought through for their benefit”. I often have a cryptic answer to it: “Do it Yourself”. Researchers, Michael I. Norton, Daniel Mochon and Dan Ariely, call it “the Ikea effect”

The Ikea effect is simple. People value objects that have had a hand in shaping, far more than stuff that has been made and delivered to them. Especially so, when the products they have shaped have had a ‘successful outcome’.

I quite liked the phrase, “The Ikea effect”. Ikea is the worlds largest furniture retailer since 2008 and is a phenomenon in the ‘do it yourself’ segment. A cursory search on the internet will throw up so many communities that offer ‘hacks’ for various IKEA products. People willing to give their own time and effort to create objects that they then end up valuing far more than perhaps what they are worth!

Change and “Do It Yourself”

Many well intentioned change initiatives stumble because people dont have a sense of agency about them. Leaders make decisions which then become slick powerpoint slides or grand pronouncements in public and are then ‘cascaded’. The only hitch: the cascade flows on like water on rock!

To accept that people have potential and to provide for the sense of agency in them is force that can be utilised well. And it provides so much more energy for the change effort.

Back to the experiments that lead to coining of the phrase “The Ikea effect”.

One set of participants were given Ikea boxes to assemble. Another, a set of boxes to ‘inspect’. At the end of it, participants were asked to bid for the boxes and if their bids were equal to or above the price of the box they could take the box. If it was below, they would not purchase the box.

Researchers found that participants bid significantly higher for boxes they built!They liked them more and valued them far more than other boxes. Which by the way, were exactly the same boxes, that came assembled!

Tom Sawyer’s enrolling several people to paint a fence is a story that I will never ever forget. Aunt Polly gave the task of painting the fence as punishment for mischief. Tom Sawyer got a bunch of his friends to do it, by getting them to value the task and offering to involve them!

If only change leaders read Tom Sawyer and how he got he fence painted white, they would understand the power of ‘do it yourself’. They would design the change effort much better

Thats exactly the tack I use with my daughter. Every time I let her know that I respect her sense of agency and ask her to go on the ‘do it yourself’ mode, she surprises me. In a good way, with outcomes that far exceed my expectations.

Every time that happens, I think of Tom Sawyer and the white fence. Change efforts that allows people an opportunity to shape the change works. The Ikea effect is powerful. Try! 🙂

This is edition 93 of The OWL Despatch. Typically, I put one out every fortnight, anchoring it on one piece of research and five other interesting reads that perked my ear.

Here are five pieces for you to chew on.

That’s that for this week. I am on a short break and hope to switch off for the rest of the week. Until next time, try to break routines whilst staying safe. And yes, you have to do it yourself to learn the most from it.