My Teachers And Their Great Expectations

My Teachers And Their Great ExpectationsKaviSeptember 7, 2021September 8, 2021 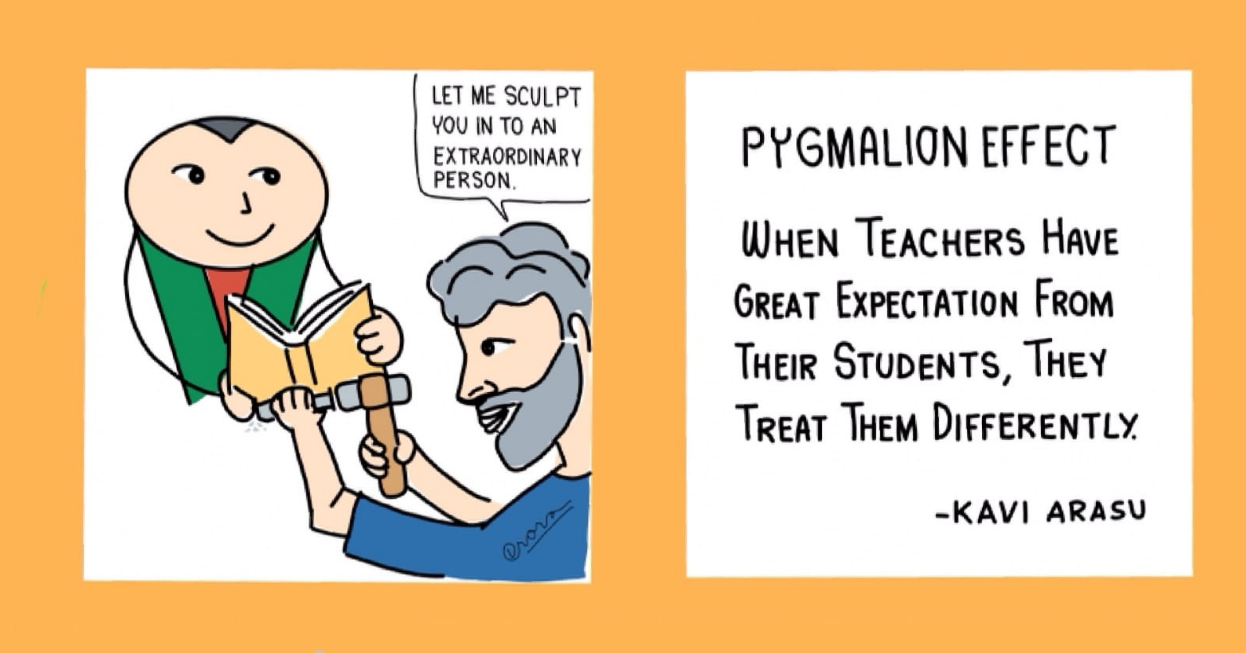 In India, September is the Teachers Day time. Over the years I have used the time to reflect on teachers who shaped me. This year, I went through my previous posts on Teachers’ day to see if there was something in common. The truth jutted out. It was clear that teachers who I thought made a difference to me, had great expectations of me.

But first a different story.

Rob Rosenthal, then teaching at North Dakota set up a lab researchers and rats. He told the researchers that the rats were designer bred and that they were exceptionally good or bad at scurrying across their mazes. Yes. He set the researchers up. For there were no good or bad rats. They were simply rats who he had labeled so in their cages.

Lenore Jacobson, who would later on go on to become his co-author, was the Principal of a school. She wrote him a letter upon reading Rosenthal’s experiments of labeling rats. “If you ever ‘graduate’ to classroom children, please let me know whether I can be of assistance,”

Rosenthal graduated from rats the next year. He showed up at her school in 1964.

Rob Rosenthol told teachers at the school that he had administered the “Harvard Test of Inflected Acquisition” on children. And some of the children in each class was poised to “bloom”. The kids were bright and that they could outo their peers!

And that is exactly what happened!

Great Expectations And Their Outcomes

It was then that the teachers were informed that that the kids were chosen at random and test was not as exalted as its name suggested. Rosenthal pointed to this: When teachers had great expectations of their students, they treated them differently. And just that treatment, would inspire the kids to behave in a different manner than what they would have otherwise done.

He called it the Pygmalion Effect. (After the legendary king and sculptor from Greek mythology who fell in love with the statue he sculpted. So much so that the Gods brought alive the statue for him!)

It is a fascinating piece of research that you must pursue more of when you have a moment or two. It is not without its critics and some of the criticism sticks. But, overall, I think Rob Rosenthal pointed to something fundamentally true. I have personal data.

Every single person who took the formal role of a teacher shaped me. Some, more than the others. And when I look back at the time I spent with them, they always began by having great expectations in me. They were all kinds. Some who would tell me on my face that they expect better of me. There were others who would be effusive and praise in private and remain grim in public. Of course, there were those who made life, hell. Back then. I now know that they created hell because they had great expectations of me.

There were a few who wouldn’t do much but nudge. A nod here. A look there. Sometimes, “There is a book I left in the library for you.” And once, “I have told the Principal you will be there for next week’s audition”.

Every time I recall them, I have tears of warmth and gratitude in my eyes. They didn’t have to do any of those. They had giant expectations! I shudder to think what I will say when I come face to face with some of them who harboured expectations that are a far cry from my realities of today.

I don’t have to think long to understand that those are the precise expectations that have brought me this far. And that have kept me going. To this date, they fill me with immense hope in the future. My gratitude to my teachers spans the universe.

This is edition 88 of The OWL Despatch. Typically, I put one out every fortnight on interesting reads I picked up. Here are five pieces for you to chew on.

The Future of Work is Hybrid: Here’s How to Thrive in the New Normal

It is a question that has been on the lips of several business leaders I spoke to last week. Why have so many workers have lost interest in their jobs?

Little Flaws. Morgan Housel made me pause and ponder. Again.

When seeing yourself on Zoom feels like a funhouse mirror. For the times we live in.

The end of phone calls: why young people have silenced their ringtones

So, September is well and truly here. Teachers day makes Its a month of gratitude for me. How is it for you? What expectations did your teachers have of you? Lets compare notes! Until then, stay safe and please consider keeping the mask on.