When It’s Almost Over. Almost. 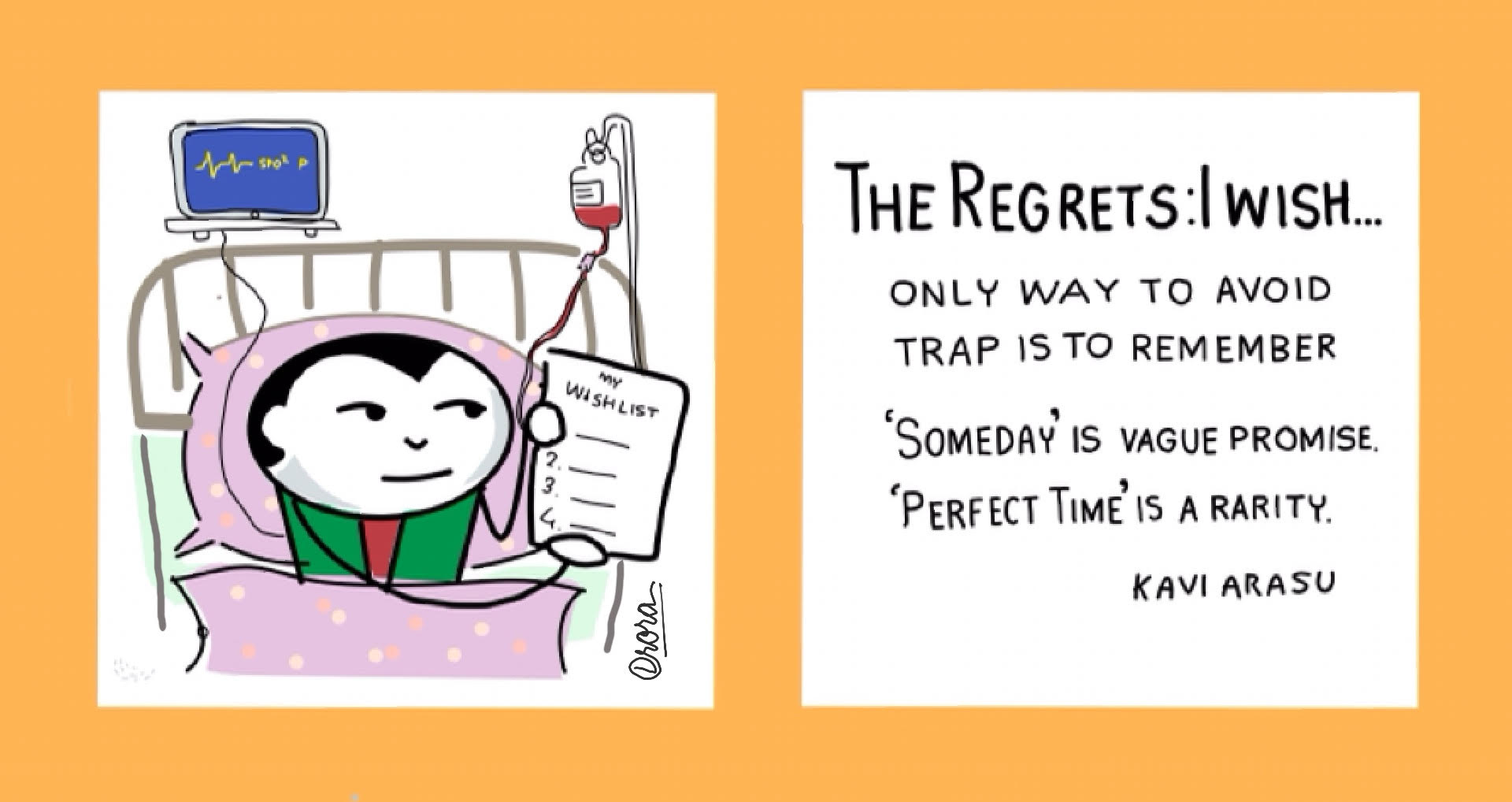 What would you be thinking when it’s all over? Almost over. When you are living your last few days of your life? Well, it may be a morbid thought, but it is an important thought nevertheless. You see, the point of it all, reveals itself in the end. Not in a grand unveiling sort of a way. But in a slow replay that leaves behind regrets, smiles and unrest or peace.

Please indulge me and think about what your thoughts will perhaps be. Or rather, ought to be. Before you get there, let me introduce you to Bronnie Ware, if you haven’t heard of her already. Bronnie Ware was a palliative care nurse who spent a lot of time with patients in their last 12 weeks of life. With ‘when it’s all over’, written all over.
She heard first hand and started publishing in a blog called “Inspiration and Chai”. Which morphed to a book titled “The Top Five Regrets Of The Dying”.

The Regrets. When It’s Almost Over

There were five broad themes of regrets that Bronnie heard from the patients she cared for. Its a full book, but here are the themes.

When I first read this a few years ago, I had a steady job, and its attendant tails: a home loan, aspirations that slept and long lost friends who stayed lost. I ended up discussing the book and the regrets with someone on a similar boat. He said, “I have all these regrets now. I am nowhere near palliative care”. He let go a nervous laugh.

Like opening a window and hoping the remorse filled air would make a quiet exit. The silence stayed for more time and the topic lingered.
We had a fascinating conversation and we both resolved to do something with better with our lives.

We made a list. We needed to get off the treadmill and walk the trail. And then came a promise to load ourselves with courage and grow deaf to random opinions of which there were aplenty. We had to go back to nurturing a commitment to savour experiences and go easy on materialistic outcomes.

At the end of it, we realise it was a tall ask. A sharp turn on the road where we were on. We could take it. Or carry on.

We had decided. We tucked our tails between our legs and clambered on to the corporate wagon for some more distance.

One day, in a very different circumstance a different insight arrived. It made a strange connection. Like a trapeze artist snatching someone who was going in another direction and flying to a different corner. The letter was written in 2000 by Warren Buffet.

One paragraph went like this.
“The line separating investment and speculation, which is never bright and clear, becomes blurred still further when most market participants have recently enjoyed triumphs. Nothing sedates rationality like large doses of effortless money. After a heady experience of that kind, normally sensible people drift into behavior akin to that of Cinderella at the ball. They know that overstaying the festivities – that is, continuing to speculate in companies that have gigantic valuations relative to the cash they are likely to generate in the future – will eventually bring on pumpkins and mice. But they nevertheless hate to miss a single minute of what is one helluva party. Therefore, the giddy participants all plan to leave just seconds before midnight. There’s a problem, though: They are dancing in a room in which the clocks have no hands.”

The last few lines felled me. Long after that meeting was over, I sat in the dark room. I was the Cinderella in the ball awaiting my pumpkin and mice. As a ticking clock without hands made some noise. I realised that the appointed time was mine to make. It wasn’t going to march in with the band.

That day, I told myself that ‘Someday’ is a vague promise. It is often a feisty kick to the ugly can, so that it lands far down the road. After a while, I made some decisions and moved on. Till this day, I think of the clocks without hands. It rarely is ‘Perfect time” to do anything. Kick a habit. Take a risk. Start something new. Jump off the rat race. Start one all over. Call a friend. Renew. Staying happy. Whatever.

There is little point to waiting for when it’s almost over. Live life. Tall. I didn’t mean to make this philosophical. But hey, it is not. It is perhaps the most practical thing I can ever tell you.

This is edition 84th of The OWL Despatch. Typically, I put one out every fortnight with five interesting reads I picked up during this time. Here are five for you for this edition.

1. Seven Ways Leaders Can Prepare for Post-Pandemic Times
2. Prebunking Vaccine Lies
3. How People Learn to Become Resilient
4. You Can Only Maintain So Many Close Friendships
5. The History of Cricket in the United States

That’s that for now. Stay kind. And helpful. And of course, wear that mask. That thing is not over. Not even close.