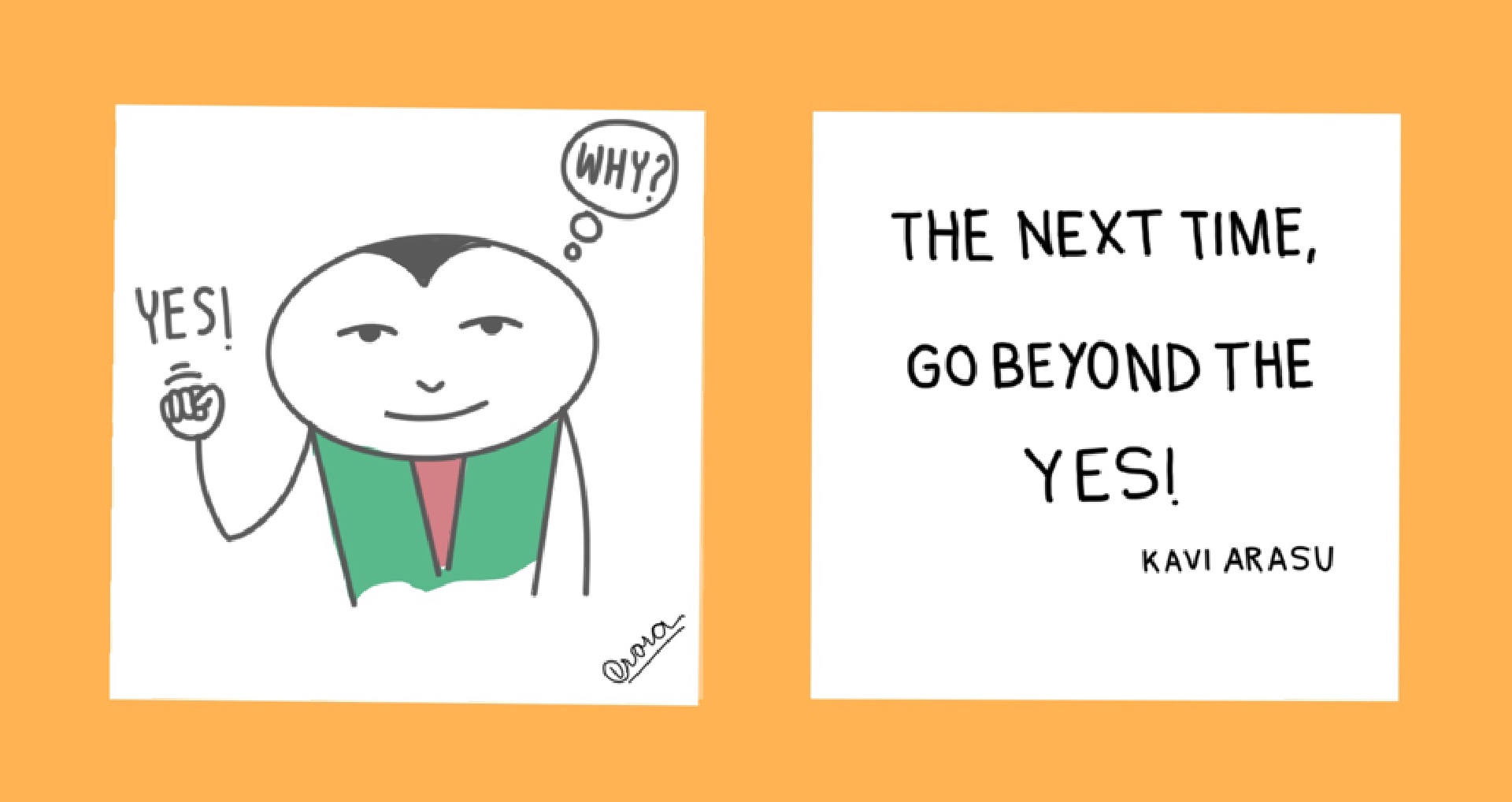 Much of leadership and business conversations are about getting people to a ‘yes’.  But precious little is available for going beyond the yes.  There are books, programs, promises all tuned towards overcoming a ‘no’.  But a ‘yes’? What do you do after that?

Picture a dusty town in a hot plain. The Sun is beating down with its usual intensity leaving sweat and dust in its wake. A small family of a young lady, her husband and her parents are at a board game.  As they meander towards the evening, the conversation meanders to choices for supper. The father suggests that they drive 42 miles in an old car with a broken air-conditioner.

The young husband doesn’t think much of the plan but is present to the fact that it is father-in-law who is suggesting this in the presence of his wife and daughter. He says he is good to go only if his mother-in-law comes along. The mother-in-law looks around and doesn’t want to disappoint others and says yes. So does the daughter.

All four of them end up having a lousy drive and a bad time! After they are back, they have a small conversation. Everyone realises that all of them agreed to go despite individually not wanting to go! Everyone thinking the other wanted to go! Including the father-in-law. He says finally, that he didn’t want to go and offered this as a way out of possible boredom for the others!

Does this sound familiar? It happens in organisations, families, friends and every other circle I am part of.  If you thought managing conflict is necessary, managing agreement is more than merely necessary!

Going Beyond The Yes

The next time someone says ‘yes’, please consider staying with the ‘yes’ for a while. Why did the yes come about? Is it for the right reason? What assumptions are you making? What assumptions is the other person making?  Is it wholehearted?

Here are two things to do. Whilst these are good practices, work out what works best with you. Whatever it is, try going beyond the yes!

After learning the hard way about the challenges of settling for the first ‘yes’, I have worked hard on finding other clues. For instance, taking the care to notice the energy in the voice and the congruence in expression.

Mapping data of the expressions on others faces, pauses in the conversation, the collective energy in the room all give clues. Looking for clues gives data about the ‘yes’!

Prodding the team with insightful questions and listening deeply are critical. Questions are an important and underestimated weapon in a leader’s arsenal.

An experimentative mindset is one that does not conclude but holds several hypothesis. Encouraging experiments means creating safe space for failure. It also means an opportunity to take small decisions and chew a big challenge in parts.

I once worked with a CEO who wanted to have an ambitious target met. The top team had agreed to it with energy. When I started working with each one of the members of the top team, I realised that they were signing off because despite serious misgivings. The CEO himself had misgivings too but was buoyed by the energy of the Top Team.

We agreed on a small set of experiments to clarify the scope of the project. Luckily, because it was set up as an experiment, they engaged with the data differently. The CEO was happy that his Executive Committee was finally “seeing reality”. Guess what, so did the Executive Committee think of the CEO!

The story of the father-in-law and the dusty town in a hot plain, well, it is a true story.  Jerry Harvey wrote about the managing the yes in a wonderful paper in 1974. He called it “The Abilene Paradox: The Management of Agreement”.  Abilene? Well, yes. Abilene is the place in Texas that they drove to. The place where each person didn’t really want to go to, but agreed to!

The next time, go beyond the yes! 🙂

This is edition 75 of The OWL Despatch! It’s a labour of love with a short essay and a five links for readers. It usually goes out every other Tuesday. As always, here are five pieces that I read over the last two weeks that could kick start some thinking in you.

1.   Time Awareness or How I Found Time for Life While Working Remotely

2. Did you know that we create false memories to achieve the identity we want? False memories! https://theconversation.com/the-real-you-is-a-myth-we-constantly-create-false-memories-to-achieve-the-identity-we-want-103253

4. Did you know that one hour video conferencing emits 150-1000 grams of Carbon Di oxide. Leaving your camera off would do good to the planet. https://www.purdue.edu/newsroom/releases/2021/Q1/turn-off-that-camera-during-virtual-meetings,-environmental-study-says.html

5. Why are you more creative in coffee shops? https://www.bbc.com/worklife/article/20210114-why-youre-more-creative-in-coffee-shops