The Many Hats We Wear 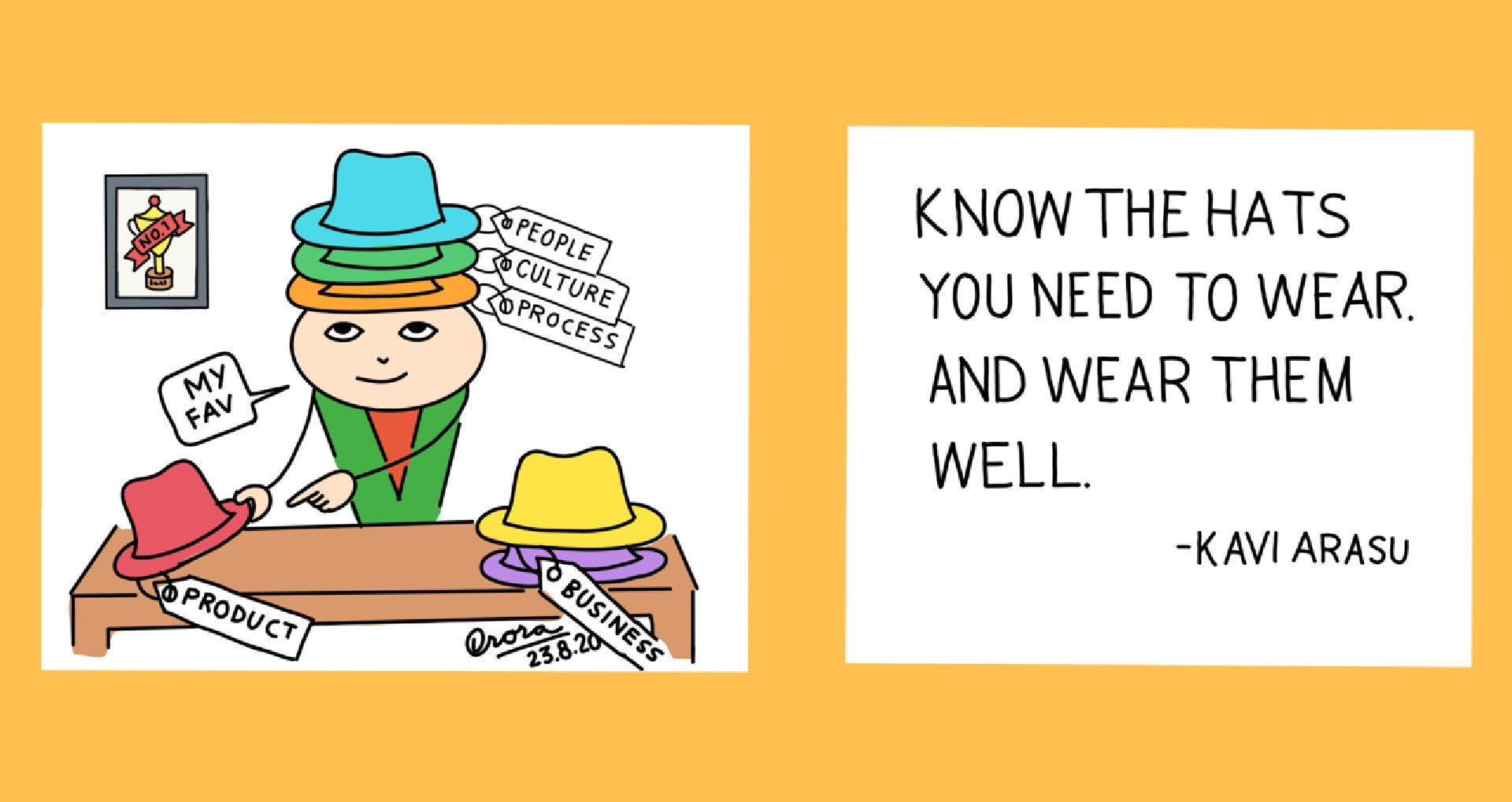 A hat was an integral part of business attire until not so long ago. Columnist Neil Steinback wrote in “Hatless Jack” that it was John F Kennedy’s dislike for hats that confined the hat to history. I wager that suits and ties will meet the same fate soon. Meanwhile, let me share an interesting conversation from a couple of weeks ago, with due permission. That conversation ended with a note titled “The many hats we wear”. So.

A software ace hit upon a product idea. It is a brilliant idea at that and he founded a company. Now, I don’t know much of software but when I look at the kind of people and the quantum of money that has followed this idea, well, it sure is a validated great idea! The software ace soon became a founder with bag loads of money and you would think all is well in heaven. I did think that too. Except that it was not.

“I hate my life”, the famous founder, told me after two meetings. “I founded this firm so that I can write my code and build great products. These days, I don’t do anything but talk to employees. When am not talking to employees, I am talking to investors. Or to the finance folks. I would love to sit in a corner and code”.

The Many Hats We Wear

As is my wont, we examined the hats he has to wear on a big board in his office. It was a long list. Motivator. Mentor. Manager. Financier. Marketer. Salesman. Recruiter. Appraiser. UI Designer. And somewhere there, a software programmer. Shortly, we launched into an exercise titled, “The Many Hats We Wear”. The goal was to come up with metaphorical hats with specific names that he has to wear to do justice to his role and secure his organisation.

He came up with the following hats after talking to a few people.

There were a few more initially. But we whittled it down to these. Just getting it out seemed to calm him down quite a bit. We then applied a few lenses to look at these hats. “I love the product hat. Detailing out processes comes naturally to me. People and culture are important and I can work on those.. Honestly, the business and relationship hats are an energy drain for me!”

We sat in silence for some time. I could see that it was beginning to dawn on him that changing the many hats we wear, was important. A couple of meetings later he said calmly. “I kept looking forward to wearing the Product hat at the exclusion of most else. That is a hat I love to wear. That is the problem.”

The Common Denominator Of Success

There are many roles that we play in life and at work. Challenges arise when we don’t balance between what we like to do and what we are required to do. Years ago, I was introduced to a speech by Albert Gray in 1940, titled “The Common Denominator Of Success”. (The link to it is part of this edition below). Albert Gray, In the quest for finding the lowest common denominator of success across professions and much else, made a sharp observation.

The common denominator of success – secret of success of every individual who has ever been successful – lies in the fact that he or she formed the habit of doing things that failures don’t like to do.

To me, the most important part of that paragraph is “like to do”. In life our success lies beyond our immediate likes. Holistic success involves going beyond comfort and immediate ‘likes’ and areas of comfort. The manager who establishes relevance by just tracking presence and performance may need to get to an area he dislikes: getting comfortable with ambiguity and taking bets on the future. The consultant who enjoys ideation process and ignores her finances, business development because she likes the former more, must realise that success in the consulting practice is some distance away without that.

The startup founder then wrote a note to me after our conversations. It said, “I realise my success lies in planning and DOING thing I don’t like but have to be done. The stuff I like, I will always find a way of doing. I realise I need to grow up to wear many hats“

I couldn’t agree with him more.

Over to you, how many hats do you wear? How often do you change them? Would you have a minute or two to sit down and wonder about the hats you have to wear and the ones that you normally do? Its a great exercise to put your thinking caps on and reflect. I did. I didn’t quite like the result. That is when I reminded myself that my success was to take what lies beyond my natural ‘likes’ and ‘dislikes’ seriously!

The OWL Despatch is a labour of love where I share I five pieces which got me thinking, every fortnight. This is edition number Sixty Six!

First off, as promised, here is the speech of Albert N Gray, from the insurance world. Its called “The Common Denominator Of Success”. I have sat with this speech for hours. It is not perfect in many ways, but it sure will get you thinking. Give it a read.

Second, 29 psychological tricks and tactics used to make people buy more. Perhaps awareness of it will give you a sense of life. Incisive. Loved these snippets!

Third. How many hats do you wear is an anachronistic question for this age. The moot question is will you look silly in the future, if you ask someone for their business card? Well, Google is out to disrupt the business card and its running a trial in India. Check it out!

Fourth. I chanced upon n absolutely hilarious piece that starts with the Australian Prime Minister Tony Abbott and his instagram page. Holds attention and several lessons along the way. Read here! Its hilarious!

Fifth & finally, some poetry. Being a poet is one the many hats I would love to wear. Here are a set of poems that moved me. It explores the idea of ‘absent presences’. Just lovely stuff. Please take the time.

Sixth. Here’s a bonus. Are you interested in books? If yes, Self-help? If you are, here’s a post that holds the best self-help books of the 21st century. I have read some of them. The rest definitely seem interesting.

A hat tip to Abhijit who shares a quote for thought.

It stirred me up. If you have any other quotes, articles to share, happy to add it in here.

Deepak’s image always adds colour and perspectives. Hats off to him! That’s that for this week. Have a good week ahead. Do not hesitate to help someone at the drop of a hat! You never know what it can do to them or how much they would need it.