It Won’t Happen To Me 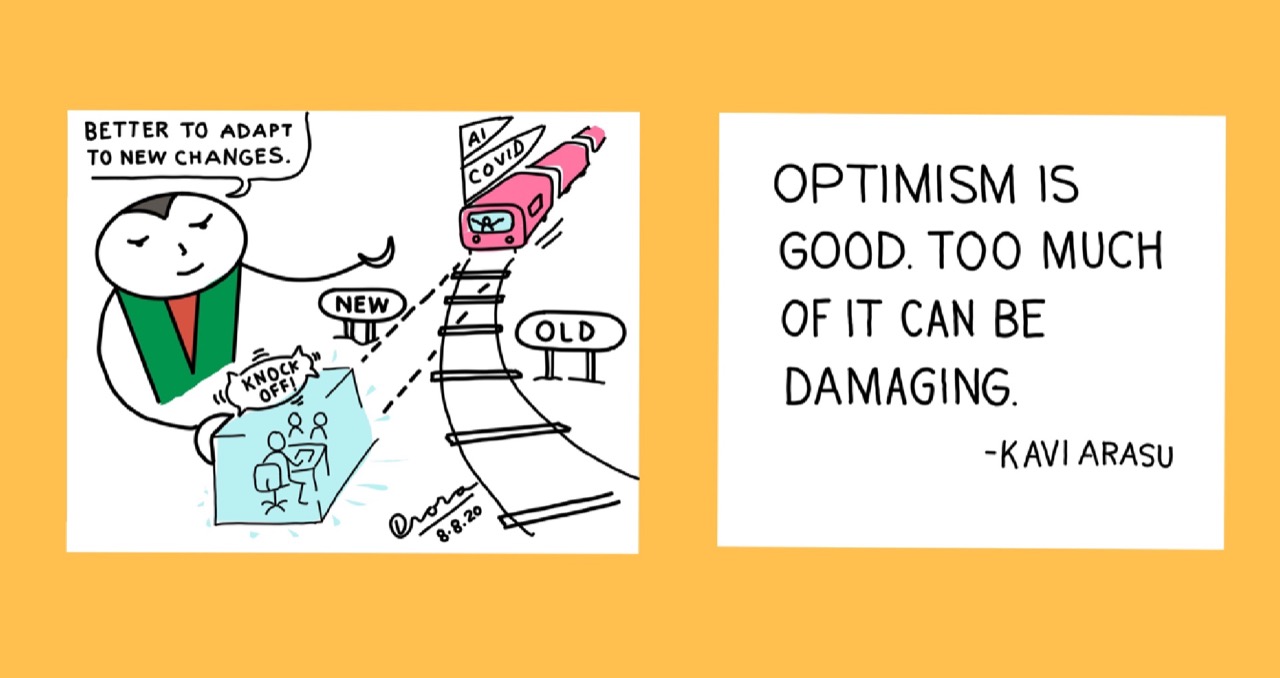 The government and everyone else with even a fraction of a brain have been imploring people to wear masks. The success of this imploring has been limited, to put it mildly. From warnings on cigarette packs to drunken driving to masks, people take risks that are plain stupid. Why? We are all plagued with what social science calls as ‘Optimism bias’ which leads us to think that “It won’t happen to me”.

Optimism bias “is the belief that each of us is more likely to experience good outcomes and less likely to experience bad outcomes.” Yes. Belief. The belief that will get us to puff away in the notion that lung cancer happens to other people. Or for that matter career obsolescence is for people in other companies. Maybe in other industries.
Before we go there, let me change tracks for a bit.

Stopping Death On The Tracks

To date, hundreds of people die on train tracks in Mumbai every year. All attempting to cross the track, while seeing an ongoing train coming. Most times, they underestimate the speed of the train and overestimate their capacities to cross the track. Final Mile, a behaviour architecture lead by a colleague Biju Dominic wove in simple solutions that brought down the deaths by 75% in one sector. They had a three-pronged approach to solve the problem.

First, they painted alternate sets of railway ties in fluorescent yellow. The alternating strips of yellow on the track gives much better of an opportunity to gauge the speed of an oncoming train. (American psychologist Liebowitz found that we don’t estimate the speed of large objects correctly. Yes, frequently, we underestimate the speed).

Second, they hired an actor and had an extreme close-up photograph of a horror struck face as a train was all set to run over him. It was three frames in one to provide a dynamic effect. These photographs replaced stick-figure representations imploring people not to cross tracks!

Third, they got drivers of trains to two sharp whistles instead of just one, about 120 meters from where they saw people all set to cross the track. Again, research lead. The silence between the two sharp whistles was useful in arresting attention. Curious about more? There are two links below. For now, let’s get back to our original track. Career obsolescence.

It Won’t Happen To Me

The pandemic has accelerated the death of a few industries and the jobs they held out. Suddenly, there are several friends who don’t know what they should do. In its speed and suddenness its been cruel. Except that, it wasn’t without notice. Sure, many of us didn’t hear the warning. Forget heeding to it.

Friends who are doctors laughed at the idea of tele-consulting and the need to invest in it. There have been organisations that have been at it for a while. Interviewers and consultants who didn’t find the idea of a video interview appealing in January, were scrambling to stay relevant by July. Several such examples abound.

“There is much going on now. I have a decent clientele. I made good money last year. It wont happen to me. Besides, I have a report that I am writing for next Tuesday”.

That’s the drift of responses that would come my way, when we use to sit down to talk about possible changes that need to be made in their jobs. Much like underestimating the speed of the approaching train, many of us underestimate the size, scale and scope of changes that are coming on our career tracks. It is comfortable for us to get by this moment with a shrug and a “it won’t happen to me”!

Here’s what I have as ideas, taking a leaf out of the intervention by Biju’s team.

Scan the horizons beyond the immediate probables, periodically. The number of senior leaders who refuse to look at ambiguous probabilities and soak their calendars with the immediate doables is no small number. To be able to cultivate a long term view of whats up in the horizon is mandatory. Reading, listening in, exchanging notes about the scenarios for the future of your profession and career are important.

May I also suggest talking to people who have just lost their jobs? Or livelihoods? Or ways of living? There are plenty around just now who would benefit from the the conversation. But what you would gain is an in first person account of what it means to have the ground shift beneath your feet. I have had some conversations. Some of them kept me awake!

And then, find a way to put these into a routine. I do a once a quarter online meeting for about 90 minutes with a few industry leaders who want to discuss and discover what’s coming our ways. Some conversations don’t seem to lead up to much to do for now. But they always fill me with humility about what I do now and what could happen to it, in the future.

What ideas do you have to stay relevant in the future? A future that’s coming our way faster than we can see. One thing is sure. How ready will we be or would we be swept off our feet is the question to ponder.

The OWL Despatch is a labour of love where I share I five pieces which got me thinking, every fortnight. This is edition number 65.

First off, here’s are two links that will give you an idea of the Final Mile team’s work with the railways. Nudge theory and behavioural science in action. Click here and here.

Teaching children to dream. This piece first came up in 2017 and then came up again in my learning stream. ” Current schooling seems outward-in. We prioritise knowledge above all else. It is tested in exams. The best in school are those who can most easily recall information. ” Give it a read. “It won’t happen to me” has a quick way of devolving into “It wont happen to my kids”! Get them dreaming. Start here.

The third piece deals with prophecies. With the number of prophecies doing the rounds about COVID and its many cures, its time for us to pay attention to self-fulfilling prophecies! “If I credibly predict a surge in the price of oil next year, the surge will happen immediately as oil traders buy low now to sell high later. The forecast goes awry precisely because people thought it was accurate.” Read here.

Marc Andreeson of the Andreessen Horowitz fame needs no introduction. How about diving into his habits on productivity, scheduling, reading etc? I found it very useful. Give this is a shot and reflect on where you are now.

What are airlines doing with their fleet of international airlines that COVID has grounded? Well, a lot of different things. From ‘flying over Antarctica to operating ‘flights to nowhere” it is a very interesting list! Check this out.

This week, Subbu sends in a piece by Adam Grant. On how jobs, bosses and firms may improve after the crisis. Brilliant piece. Thanks Subbu.

Abhijit shares Churchill’s speech from 1940. “In one phase men seem to have been right, in another they seem to have been wrong. Then again, a few years later, when the perspective of time has lengthened, all stands in a different setting. There is a new proportion. “

This speech is particularly appropriate for this time. The Chamberlin – Churchill relationship went through many equations. Quite unusual. Thanks much Abhijit.

And I doff my hat to Deepak. Who once again provides the picture that sets context to this post.

Until next time, wear a mask and stay safe. The mantra “It won’t happen to me”, doesn’t work.

behaviourbiasCareerChangeforecastFutureIt wont happen to meoptimismtracks
RELATED POSTS
Ideas For Getting Better At Your Craft KaviJune 16, 2022June 16, 2022