Headed For A Burnout 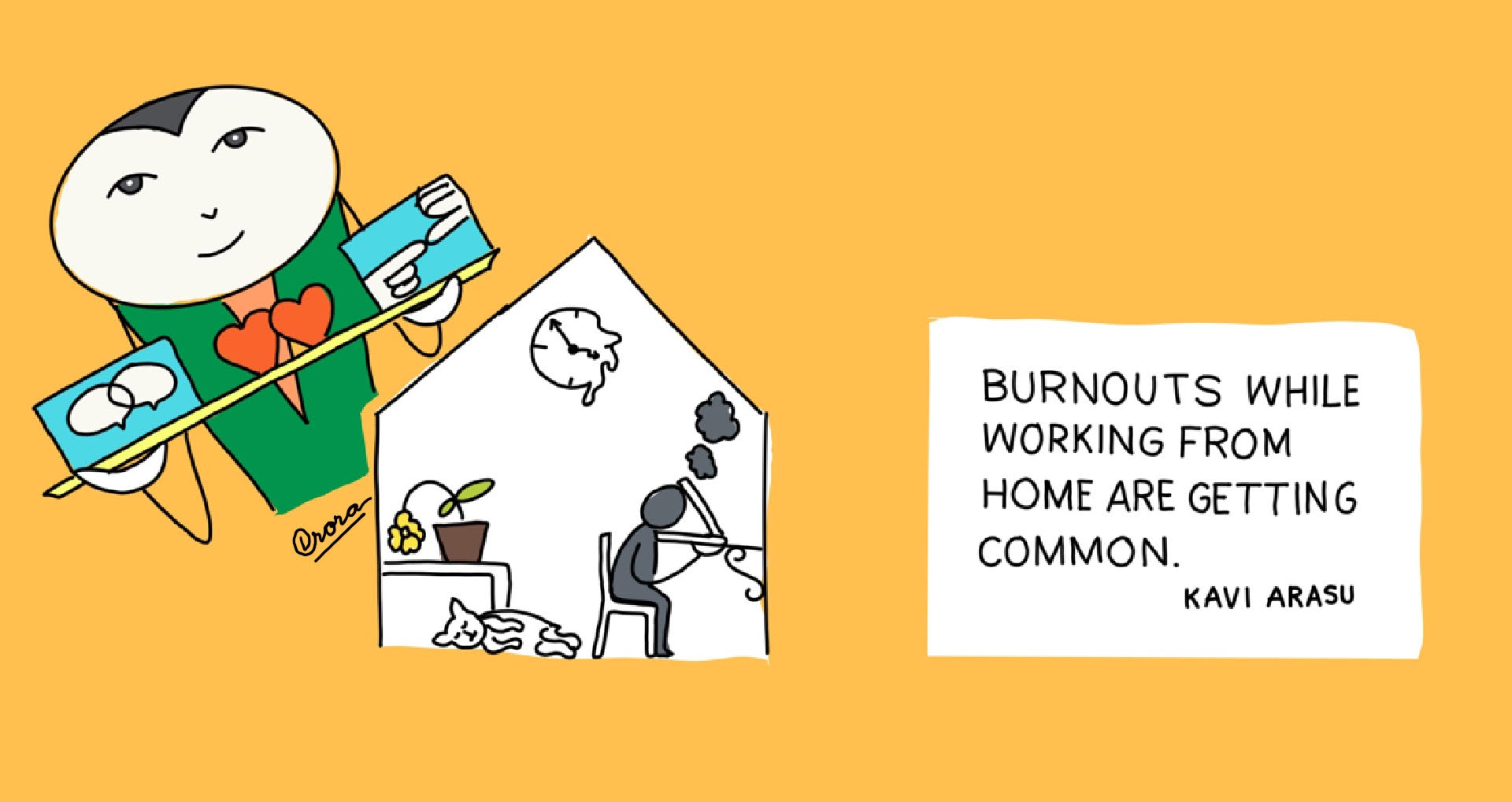 Last week, four business leaders called in with one problem. They or their teams were experiencing high stress and were headed for a burnout. So much so that some employees were leaving. This wasn’t the case in April. All four of them had seen an increase in productivity back then and were wondering why they hadn’t thought of working from home earlier. But now, this is July!

I invited them to an ideation session. We all brought our mugs of coffee into the virtual room. Along with coffee, they came in with a promise to share and I took along some research that I am familiar with. It was a fascinating conversation that went for two hours when it was scheduled for one. They took back some stuff to work on and I came away with something I could share on The OWL Despatch, about being headed for a burnout.  This is with their permission of course.

We spoke for some time about April with a fondness reserved for a teenage crush. At first, we spent some time trawling our memories of what happened in April. The pandemic was at play. But work from home was novel. It took away the travails of dealing with a long commute and lousy colleagues. Employees chipped away at what was necessary and kept away everything else. There was a meeting for everything. The young kid showing up on video calls was cute. It was not as bad as they had thought. Actually, life was good.

But things didn’t stay that way.

The Demands Of Work

The demands that work placed on people seemed to stretch. Meetings never ended.  If they did, it was only for answering email. Senior managers began calling their teams at odd hours and conducting impromptu reviews because, ‘they were anyway home’! Life was a never ending to-do list.

There were two other factors. Many employees were still new to working from home. They were trying hard to learn the new medium of work even while technology played truant. Electricity problems and noise levels at home were something else. There were other anxieties too.  ‘Am I looking ok on the camera?’ ‘What will my colleagues think of my house?’ ‘How will I demonstrate that I am indeed working?”

And then of course, everyone was home. Just getting the internet bandwidth sorted between the kids classes and office work was quite something.

Stress was a fast and furious avalanche that hit people who thought they were having a good time!

The Degree Of Control

Atop all this were managers who were not ready for work from home. For many, work had made a geographic shift from office to home. Everything else remained the same. Managers who drew relevance from supervising presence have been struggling to establish relevance.

Some of them insisted that their teams must keep their cameras switched on. There were others who cited the need for tracking software to ‘have a grip on’ what else employees were browsing and which other tabs were open. As stories of job losses and pay cuts abound, everybody is walking on eggshells.

Employees who had other pressing needs at home had little latitude for redesigning their work! Even if their managers willed. The work from home life was one on the hamster wheel. Heck, people missed traffic. In all the chaos and noise of traffic, people would have a few snatches of inner quiet!

Employees working in an office had people around them who they could reach out to. There was a sense of shared space and time. It was a collective experience.

At the end of a meeting, people would linger. Or walk back together and catch up on all what else that was happening. These days when an online meeting is ended by the host, they turn to their wailing kid or a waiting meeting. Overworked brains and a drained soul show up an screens, often worried if their jobs will stay!

Plus, one of them said, “I don’t know where my work goes. I don’t know if it is useful. Working from home has some huge advantages. But everything just goes into this screen and I have to be content with it”

The four of them seemed unstoppable and kept building on each others point of views.  We stopped to make sense of it all. It was clear that Work From Home comes with its pluses. But work needed reimagination for home. Without that, it would fasten wheels to the pathways that were headed for a burnout.

We decided to tease out ideas for action.

1. How might we have continuous conversations on what part of the job is relevant and what needs adaptation for home?

(For example: What documents are most important that need more three pairs of eyes and two approvals? What work can happen without approval? What systems and processes for controls needed to be in place for this?)

2. Meetings: How might we ensure that our meetings strike a balance between outcome orientation and other needs of our teams?

(How do we do call in only the most necessary people to a meeting? What might we do to ensure teams don’t pick meetings as their first preference for communication to each other? How do we record keep and provide for easy retrieval? What tools and technologies can we invest in helping better adoption?)

3. How might we provide employees with opportunities to help each other? What are avenues for small wins? How might we increase a sense of autonomy for all our employees?

(Could we ‘engineer’ serendipitous conversation on the job? How might we get people to understand that this is a difficult time and they have to make an investment in rethinking their workflows)

The four of them left the meeting with these three question clusters. I was left reflecting on the meeting and my notes from research by Karasek and others in 1979 and has been the subject of much more research since then.

Burnouts are creeping in. The demands we place on ourselves, the degree of autonomy on the job and the support available are dials to watch.  Over to you. What can you do to change from one that’s headed for a burnout?

The OWL Despatch is a labour of love. Here are the five pieces for you to read for this edition. This is edition number 61.

1. Idea-Sex. This link will take you to a safe space that will dwell on generating ideas on demand. Really.

2. “The rules of organizing a high-performing team have fundamentally changed, and it can be dizzying to pick and prioritize your new list of to-dos.” Here are five tips to protect the emotional health of your teams.  Pretty good!

3. In the era of living out of a screen, this post gave me ideas about teaching online. Some of which I have been talking about as well. You can consider sharing it with your kid’s teachers. Or you could well use it whilst you are on meetings.

4. There are some products whose demands have shot up, thanks to the pandemic. Japan has been making a lot of slippers for the world. Who wants to wear shoes anyways?

Deepak drew up the visual for this edition as well. His speed and creativity is quite something.

A reader sent in this news that Linkedin is looking to allowing users to record their own name and add a voice clip to their profiles. “The update to LinkedIn’s interface allows users to record up to 10 seconds of audio via the app to pronounce their names. Others can listen by pressing a small button on people’s profiles, either on the app or the website.”. Pretty cool. I think.

Thats that for this edition. Hope you are staying safe and and helping others stay safe as well. And by the way, if you think you are headed for a burnout, don’t take it lightly.