Gradually and then suddenly. 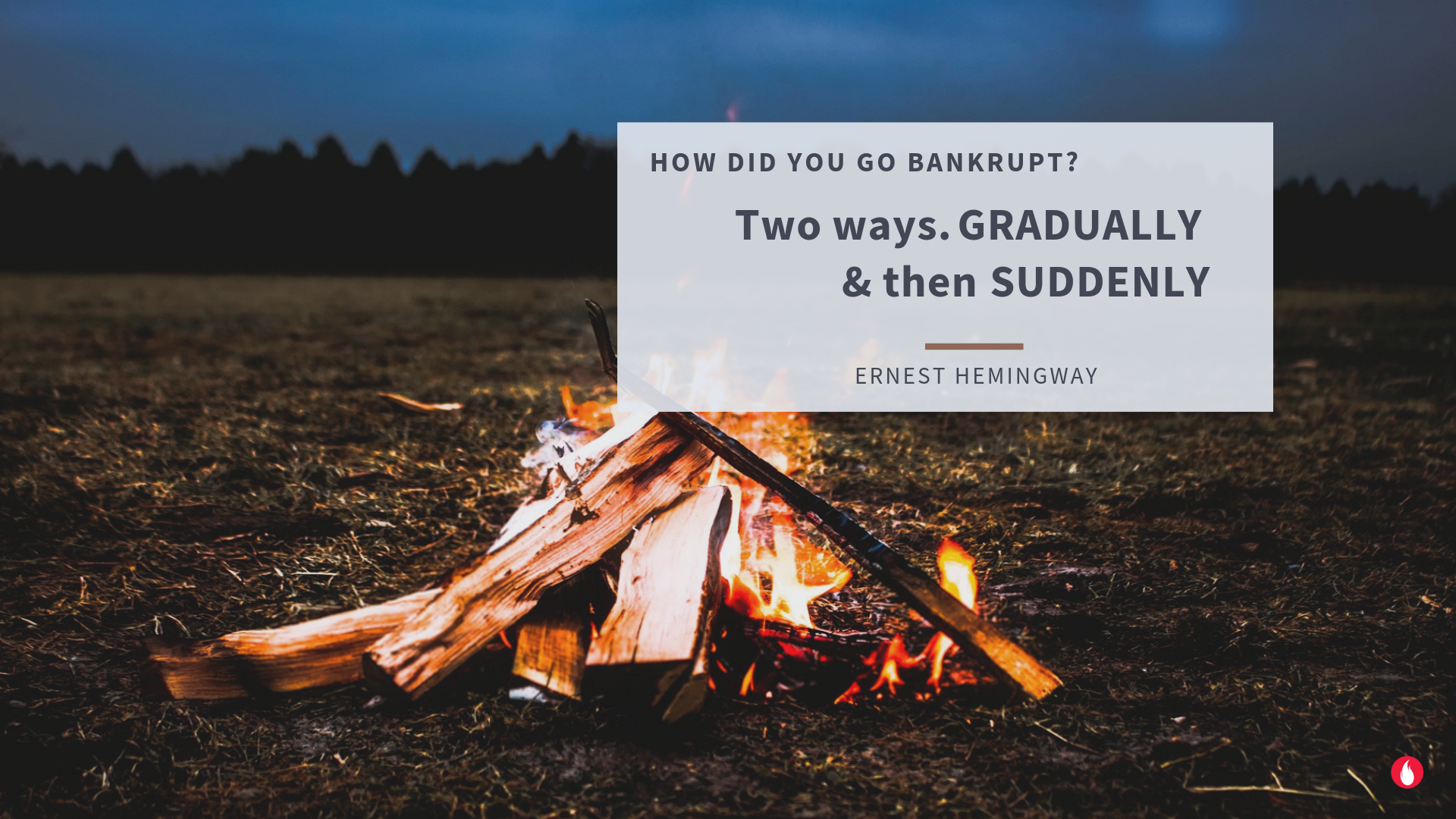 Last week, I bumped into someone who I hadn’t met in a long while. It was he who walked up to me and said hello. Truth be told, I had struggled to place him. He was a pale version of the easy, sharp, witty, handsome and fit chap everyone else wanted to be.

“One success lead to another”, he said, as we exchanged notes. His journey to become the big boss of a large firm had brought him immense recognition, wealth and a retinue of people at his beck and call. Of course, he had to put in long hours and survived with a clutch of pills in his pocket.

“It began with losing a couple of hours of sleep on a regular basis. And it it graduated to surviving as work consumed nights, days, weeks and months. Then one day, the doctor confirmed what the mirror indicated : you have withered your body”

He paused. The silence spoke aloud.

I remembered a famous line from Ernest Hemingway’s novel, The Sun Also Rises.

“How did you go bankrupt?” Bill asked

That’s the thing about change. Clues of the whats coming keep dripping. Not with ominous plops or grand announcements but with a familiar tone of a lullaby.

That applies everywhere. The family that disintegrates. The organisation that goes bust. The country that loses its essence. These don’t happen overnight. We get to see it ‘One day’.

Of course, this is the case when people are trying to change for the good as well. When you work on picking up a skill, a new habit or even transforming a large company, change happens in infinitely small instalments. To be able to spot these, acknowledge (it) them and stay patient with the change, makes much of a difference.

The trouble is in the lack of grandeur that ‘gradual change’ brings. Sudden change makes everyone sit up. Gradual change doesn’t disrupt life. It wears a giant stealth cloak of ‘business as usual’, while being pregnant with the disruption.

Tim O Reily’s piece, “Future of the firm” is an important read. Please do take the time to soak in and have a chat or two. How important would this be when we are wrestling with this quarter’s numbers or completing annual appraisal conversations? That’s part of the ‘gradual change’ mirage. Such stuff requires us to make the time and dive deep and exploring. Staying relevant is a moving target.

Here is an example. For a long time I believed that the creative industries would survive the onslaught of robots. Lo and behold, I now read that a script of an entire movie has been written by an algorithm. An algorithm that was fed scripts of several movies spewed out a new one! I sat in silence for a long time after reading that. I am sure some app somewhere was noting that.

The future is here. It is changing our idea of work, learning, living, leisure and everything else too. A piece titled “The Affluent Homeless” brought alive the rented realities of a different world. That was accentuated by the firm that declared every Wednesday as a holiday, besides the weekend that is.

Don’t just stop there. How about parsing that with some other data. Jet Sanders from the London School of Economics points from his research that risk tolerance goes down from Monday to Thursday and then rises again on Friday. When Big Data plays footsie with behavioural science it changes our notion of table-stakes. In all this, will be the important struggle to stay human.

That’s the future. It is coming at us gradually. And then one day, it would have landed at us. Wherever we are, whoever we are, there are enough signboards informing us of what lies ahead. In the places we work, in the cities and communities we frequent, in relationships that mean much to us and so on. The deadbeat of habit, the steady rhythms of hope or a romance with the notion of ‘it will happen to the other person / nothing will happen to me’ and variances of these can envelope us in comfort cocoons of wilful blindness.

One way to find if that is the case, is to begin by being honest with ourselves. The other is to have some hard conversations.

May I invite you to try.