Life On The Screen. Four Ideas To Live it Tall 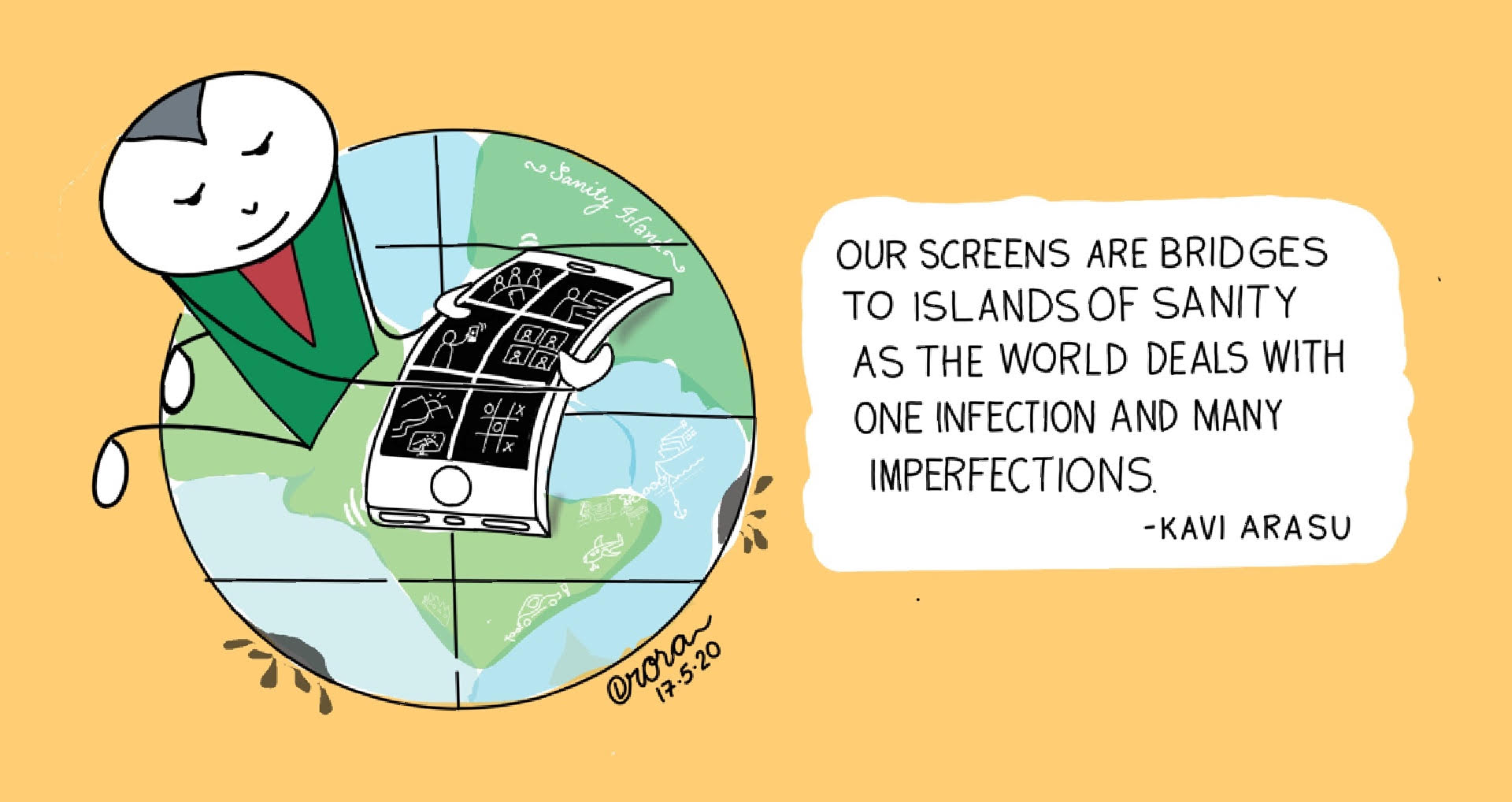 Heres a question for you. How many hours in your daily day do you spend with your eyes gnawing on a screen? Quite a bit I would reckon. TV. Laptop. Desktop. Mobile. SmartWatch. They are all screens! Each providing us with a gateway to the world.  Screens help mediate our decision, relationships, political leanings and much else. Importantly, life on the screen is a living necessity for millions of people around the world.

If you are still with that question of how much your screen time has gone up by, I present to you Saturday Night Live star David Spade’s tweet.

Screens have provided succour for a while now. For several decades, the silver screen was the only screen we knew.  Mega films, big studios and bigger stars showed up as festoons in street corners and posters in teen bedrooms. Not to forget, contributing to the making of megapolis’s like Los Angeles and Mumbai.

As the size of the screen that caught the fancy of people has come down from the mega silver to smaller screens, more and more of us are getting inside them.  The screen is no longer a place where a story comes alive. It is our prime tool that we used to shop, read, learn, talk, buy, play, create and so on.  Our life on the screen has changed both our lives and our screens!

Twenty-five years ago, the omnipresence of the screen was sci-fi staple. Until that future supplants the screen with wearables and implants, our eyes will continue to devour our screens in ways futurists from the past never would have imagined.

The binary argument that blew up

As late as early March, there was quite a lot of conversation about screen addiction and what it does to us.. Then, along came the lockdown and put screen time on booster rockets. We have had little choice and less time to ponder over this.

The past weeks of cooped up life have brought a new found legitimacy to screens. Imagine a life without them! The screens are bridges to islands of sanity as the world deals with its many infections and imperfections.

The question that we stare at now is not whether screen time is good or bad.  Now that they play such an integral part of our lives, we should occupy ourselves with the thought of how we can make our screens more productive.  How do we make it work better for us?

Life on the screen as the new normal

As late as February 2020, and that seems like a century ago, there was a different normal. Since then,  the screen and what appears on the screen have become surrogates for what an office stood for. Or for that matter, a living room of a house when different families got together. A hotel banquet room. A school classroom. An arena. Poor surrogates if you will but surrogates nevertheless.

Screens have become ubiquitous and everyone has access to it. Many of us bring to our screens our habits and ways of doing things from a different era. The opportunity to reimagine how we work and think is now and is for real.  Our inability to adapt to this medium often destroys the message that we bring to the world. Be it in the form of work or personal relationships.

I have made some embarrassing mistakes and here are some of my learnings that you may want to consider.

I didn’t think of it as any big deal to be able to switch on the camera to get on a video call, for instance. But over time and disquieting feedback, am slightly better off. I mean, these days I know when I am making a mistake or two.

Take care of the hygiene stuff.  Like, remember to place the camera at eye level.  If you are using a laptop, that would mean giving it more height! (Pro-tip: Books come in handy). There is other simple stuff. Like, check the microphone. Do not sit with a well-lit window behind you. The new normal brings with it new hygiene!  It took me a while to remember that the screen was a surrogate. Once that sank in, the rest stayed in the mind.

There are new norms and etiquette that are fast emerging. It is useful to keep track of them. For instance, it is polite to let people know well in advance that an online meeting will have the video on. Do not surprise people!  If you are an invitee to a meeting always be prepared for an audio meeting to be turned into a video meeting!

To see executives in their vests, when their managers ask them to switch on their camera ‘just to say hello’ has not been a pleasant sight. It definitely has not added heft to the topic in discussion.  The one other thing that I would recommend is to develop the nerve to politely decline a video call if you are not ready for it.

3. Kids, the screen and co-creation

Kids have taken to online life, like a duck to water. Please remember to teach them the right habits and basics. Good touch and bad touch lessons were relevant to February 2020. The equivalents of abuse online are several. Have you had a conversation with them before handing over your iPads and phones to them? It is equally important to have regular conversations with kids on what they do online.  Orienting kids for the new age will mean more devices in their hands and teaching them how to use them well.

Here is a tip. Create stuff with them through a screen. A video, a blogpost or picture. Something that gets them to think of the screen as a medium to get things done. Passive consumption of stuff from the screen like binge watching movies can be a good compliment for active creation of good stuff.  Helping kids navigate and set good habits for their life on screen is critical.

The screen is an escape chute as much as it solves everyday challenges. It seduces us to stay on with one stimulus after another.  We pay all the time. When we don’t pay with our wallets we pay with our time and attention.

Pro-tip. Filter at source! Remember to keep cleaning up your reading lists and other places where you find yourself often. Online lives accumulates its own garbage. Cleaning up helps.

This is an all-new terrain. We will make mistakes and they are worth our while as long as we learn from them. If there is one common mistake that I see several people making it is this: To think that life on screen is a mere extension of how we used to live without the screen.  Adapting to this life is key. When we don’t adapt to a new normal, the fault-lines show.

For every edition of The OWL Despatch I curate some reads that I happily paid for with my attention and time. Here are the pieces that make Edition Number Fifty Eight.

1. First off. Some nostalgia and surveying all the change that’s happening around us. The Atlantic is running a whole series on the world that we are leaving behind and the new one that we are creating.  From concerts, weddings, handshakes and much else. Check it out! Heres one on titled “Good Riddance to the Handshake“.

2. In a post titled “The most important skill nobody taught you”, Zat Rana quotes Blaise Pascal. “All of humanity’s problems stem from man’s inability to sit quietly in a room alone.” Read here. Particularly contextual when the worlds most stated phrase last month was perhaps “Can you please go on mute”!

4. Are we through with the office? Would we ever get back? What was the point of them anyway? Fascinating piece. Do not miss! Read here.

5. The one thing that lockdown has also done is to expose people’s bookshelves to the world as they serve as background to video calls. What you learn about other people’s choice of books should tell something about them. And you too! Read here.

Speaking of material like that here is a curation of some good stuff that you can choose from. Charles Assisi writes the ‘Ultimate guide to good journalism’.

Vivek Patwardhan writes “Dilemmas are the proverbial ‘caught-between-devil-and deep-sea’ situations. Usually, one can see two choices, but adopting any choice by itself not a very happy situation.“ Read his post “Matador On The Horns Of A Bull” here.

One more thing. Deepak Arora, a consultant medical physicist, with a passion for visual recording has offered to draw a picture for editions of The OWL Despatch. He has been a regular reader and good people like him make the world go around.

Stay safe. There is a new good life. That is the life on screen. Take care of it.